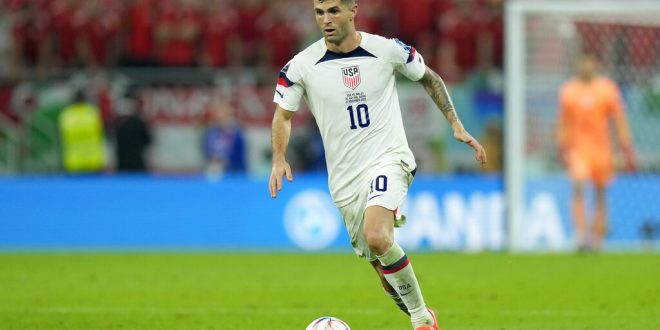 Christian Pulisic of the United States runs with the ball during the World Cup, group B soccer match between the United States and Wales, at the Ahmad Bin Ali Stadium in Doha, Qatar, Monday, Nov. 21, 2022. (AP Photo/Francisco Seco)

England and Netherlands Start World Cup With Wins; Team USA Picks Up a Point in Draw

The World Cup is officially underway, with England and the Netherlands picking up wins on Monday in Group Stage. Despite an early lead for the USA, they settled for a 1-1 draw against Wales.

England played their opening game of the World Cup and picked up a 6-2 win over Iran. The game was scoreless up until the 35th minute when Jude Bellingham opened the scoring. Bukayo Saka scored his first of two goals in the game to double England’s lead to 2-0, and then Raheem Sterling made it 3-0 right before halftime.

The young players are coming through in a BIG way for @England 🏴󠁧󠁢󠁥󠁮󠁧󠁿 pic.twitter.com/L17Adzrbk2

Saka’s second goal came in the 62 minute, but Iran responded with a goal to cut the deficit to three. However, England scored two more goals and came away with the win, 6-2. Marcus Rashford and Jack Grealish scored for England, while Taremi added his second goal of the game.

The second game of the day featured Netherlands and Senegal. Cody Gapko and Davy Klaassen recorded goals. Andries Noppert had a clean sheet, making four saves in the match. The match ended in a shutout, 2-0.

Team USA and Wales were the third game of the day. While Christian Pulisic set up Timothy Weah for a goal in the first half, Wales was awarded a penalty kick and capitalized in the 82nd minute, as the game ended in a 1-1 draw.

All square to start 🇺🇸 pic.twitter.com/lIIqy3RRZw

Goaltender Matt Turner made two saves in the game for the USA. Wales outshot Team USA 7-6 in the match, which featured six yellow cards, four for the US. However, it did have five corners but could not capitalize and sits two points back of England and the Netherlands after Day 2 of the World Cup.

Next, Team USA is set to play England on Friday, Nov. 25. Wales and Iran will also play, while the Netherlands will be playing Ecuador, and Senegal will face Qatar.

Previous Former Florida Gator National Champion Ike Hilliard Back Coaching in SEC with Auburn
Next FEATURE: A Piece of Home