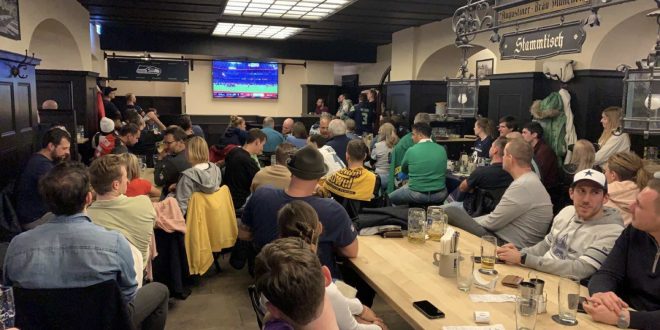 Fans gathered in beer halls around Munich to watch the NFL game with other fans of sport who could not make to the high-demand game. (Jensen Young/WRUF)

FEATURE: How are Europeans becoming NFL fans despite a lack of access to the sport?

The NFL has been the No. 1 sports league in the United States for generations. In this generation, the league is expanding its horizons across borders and oceans.

The NFL has held games in England since 2007 and upwards of three games abroad each season since 2016, excluding 2020.

Aside from these few games in select countries, people abroad do not enjoy the same level of access to the NFL that Americans do.

A big hurdle for the NFL and foreign people who are becoming NFL fans is balancing how to maintain the league’s majority presence in America while also giving enough opportunity for international fans to enjoy the NFL experience closer to home rather than hoping to see the game on TV or watching only highlights.

For the first time ever, the NFL held a regular season game on German soil. On Nov. 13, 2022, in Munich, Germany, the Tampa Bay Buccaneers played the Seattle Seahawks. This presented an opportunity for people across Europe to see American football outside of England.

Fans going to the game

One fan who took advantage of the game in Munich was Niklas Juettner who is from Germany’s capital, Berlin. Juettner has been a fan of the NFL since 2007. His favorite team, the Seahawks, happened to be one of the two teams playing. So, Juettner saw this as a must-see game despite the price of the tickets. He took the four-hour train ride from Berlin to Munich to watch it from the stands.

“I think this is going to be a historic day since it will be a huge deal and I didn’t want to miss the opportunity,” Juettner said about the game.

The NFL plans to have more games in Germany, but it is no guarantee that Juettner’s Seahawks will be back to his country any time soon.

Even though the game was in Germany, it attracted fans from many nations. One fan, Michael Niland from Galway, Ireland, has been a “big Tom Brady fan, for maybe 15 years.”

Niland remembers how he started watching American football and Tom Brady. A friend of his back home in Ireland had moved home from Boston, Massachusetts and ran a pub. While in Boston, Niland’s friend had become an NFL fan, so he started showing games at his pub on Sunday nights. As a result, Niland became an NFL fan during Brady’s dominance, which led to his fanship of the legendary quarterback.

Niland attended the game in person and described the atmosphere as “amazing” and an experience he would have regretted if he had not “seen [Brady] perform live.”

Learning about the NFL

Both Niland and Juettner traveled to Munich with plans to attend the game because they previously became fans of the sport. Not all travelers to Munich arrived with a deep love of the game, though.

For instance, Dutch native John Warrink traveled to Munich to work for the NFL. He lives in Eindhoven, Netherlands but came to Munich with a job to do. He ensured that all merchandise being sold was legitimate. This was his first job with the NFL and his first time paying attention to the league, aside from the Super Bowl.

Unlike Niland and Juettner, Warrink did not get to attend the game between the Buccaneers and Seahawks in person at Allianz Arena, but he spent the game time watching with other fans in a brew hall filled with Seahawks fans. Two things that stuck out to him about American football was the fun atmosphere and the fans’ joy.

For Warrink to become a fan of the NFL, he would have to go out of his way to access more games. During any given season, the Super Bowl is “the only match, the only game we can see on Dutch television anyway.”

The poor access to the game does not deter Warrink from wanting to explore and learn more about American football. He says the enthusiasm of the fans “makes me be a bit more interested in the game anyway” despite having a very limited understanding of the rules.

What can international NFL fans do?

Perhaps international fans can take advantage of the limited access the way that Michael Niland does. He uses everything available to him.

Despite a lack of access, American football has been growing and it is likely to continue to grow in Europe and around the world.

Jensen Young is a journalism student at the University of Florida. He works as a sports writer for WRUF.com and is the voice of trendings on Wednesday mornings on the WRUF radio station.
@Jensen_Young9
Previous Pat Dooley’s Back Nine (November 21st)
Next FEATURE—Globalizing the NFL: How Germany Has Become the New Hotspot for American Football