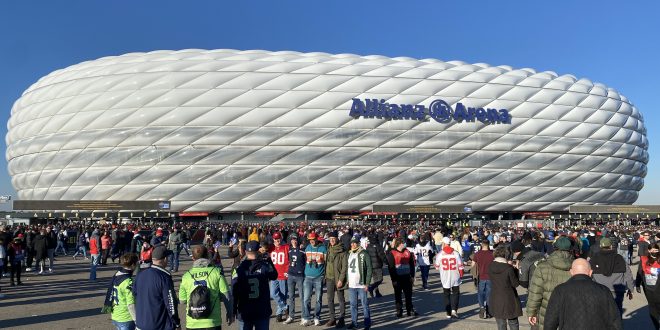 Fans head towards Allianz Arena in Munich, Germany ahead of the first NFL game in Germany on November 13, 2022. (Matthew Quartararo/WRUF)

Tailgating is one of the aspects most synonymous with American football. All around the US on game days, thousands of fans bond over the love they share for their team. When the NFL headed to Germany for the first time ever in November, how some of the American traditions and fanfare would carry over to the game in Munich was unclear.

All weekend long, a new football culture unforeseen in Germany devoured one of the country’s most traditional cities. The Seahawks and Buccaneers overtook popular Munich beer halls at Augustiner Stammhaus and Hofbräuhaus, holding fan events at each location ahead of the game.

NFL Network crews filmed in the middle of the city, with hundreds of fans gathered behind to catch a glimpse of Roger Goodell and other notable NFL figures.

Closing in on game day, it became evident that tailgating traveled well. Thousands gathered outside of Allianz Arena ahead of the matchup between the Seahawks and Buccaneers.

The NFL hosted a fan experience, complete with multiple fan zones, the NFL Store, and large helmet displays of all 32 NFL teams. A variety of food and drink trucks lined the area, as fans participated in the experiences hours ahead of kickoff.

There was a significant difference in terms of tailgating compared to what is seen in the United States. Almost everyone arrived at the stadium using the city’s public transportation system. As a result, Germany had a different dynamic compared to traditional American tailgates.

Ahead of NFL games in the United States, it is common to see rows and rows of cars grouped together in parking lots, with fans grilling, throwing a football, or playing games. Despite the lack of cars and individual tailgates, fans were partaking in games and experiences that still created the spirit and fanfare usually associated with a tailgate.

“It is never like this,” said Leon Schultz, a Munich native. “I’ve been to many [FC Bayern Munich] games here. It is not normal like this.”

Allianz Arena is typically the host to FC Bayern Munich, the Bundesliga soccer team in Munich, one of the best in Europe. But on Nov. 13, the NFL brought a brand new gameday experience to the city and stadium.

Among the experiences that the NFL included outside of the stadium were a 40-Yard Dash, Quarterback Challenge, Field Goal Kick, and Wide Receiver Challenge. The line for each activity was long, with hundreds hoping to get their chance to take part in the unique fanfare.

Along with the 40-yard-dash activity, a PA announcer was speaking with the contestants and introducing some special guests, including the Buccaneers’ cheerleading squad.

How global the NFL has gotten shone through as people shared where they were from in the microphone . Portugal, Ireland, China, Norway, and more were all represented across the fan zone.

“I love the games,” attendee Nikolai Chekov said. “This is my first time playing American football. [It is] a lot of fun.”

Chekov traveled over the course of three days from his home in China to attend his first-ever NFL game. It did not disappoint.

“I’ve had no better experience. This is [a] great game.”

Fans also took advantage of the tables – and of course, the beer – scattered throughout the fan zone to create some games of their own. This was the aspect most closely similar to that of an American tailgate.

For the love of the game… not a specific team

Unlike the typical American tailgate, there was no unity in terms of jerseys. Walking through an American tailgate allows anyone to guess the home team, and often the away team too. That was not the case in Munich. Essentially every team was represented by fans wearing their respective jerseys, hats, and scarves.

However, one jersey seemed to be particularly popular: Tom Brady‘s.

Hundreds if not thousands of fans wore the infamous “12” of the Bucs, but the 45-year-old quarterback is not the sole reason the NFL had such great success on its first-ever trip to Germany.

The country truly rallied around the game as a whole. That was evident throughout the entire weekend, as the entire city transformed into a football universe.

The Tampa Bay Buccaneers pulled out a fourth quarter win over the Saints Monday night, …