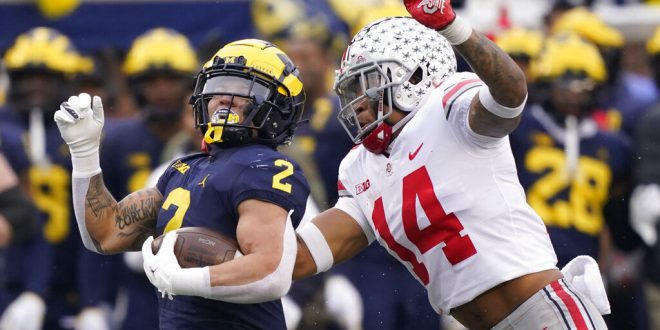 FILE - Michigan running back Blake Corum (2) is chased by Ohio State safety Ronnie Hickman during the second half of an NCAA college football game Nov. 27, 2021, in Ann Arbor, Mich. The Ohio State defense that was shredded by backs Hassan Haskins and Corum for 256 yards last year is vastly improved under new coordinator Jim Knowles. But Corum is better than ever in 2022. (AP Photo/Carlos Osorio, File)

The college football regular season comes to a close this week with potential spots for the playoff on the line and multiple teams looking for bragging rights in their rivalry games.

Not only will the winner of this game book a spot in the Conference Championship Game, but they almost certainly will clinch their place in the College Football Playoff. Both teams come in with identical 11-0 records and will play on Saturday in Columbus. This will be the 118th all-time meeting between the two teams, with Michigan holding a 59-51-6 advantage.

TCU has yet to lose this year and will have another chance to show why they belong in the CFP when they host Iowa State. So far, the Horned Frogs are 11-0 but have only won their last eight games by 10 points or less.

Additionally, four of those wins were one possession wins. However, they have beaten five ranked teams this season including Oklahoma, Oklahoma State, Kansas, Kansas State and Texas.

With USC already locked in to play in the Pac-12 Championship, a win against a ranked Notre Dame team can improve their CFP chances. The Trojans could also go into the postseason with one loss and a Conference Championship.

Despite a rough start to the season for the Fighting Irish, Notre Dame has rebounded and is 8-3 this year with wins over BYU, Clemson and Syracuse. They also have won five games in a row after starting the season 0-2 under new head coach Marcus Freeman.

Auburn vs. No. 8 Alabama

Alabama’s playoff chances are slim, but a win over Auburn in the Iron Bowl and some help from around the country could help the Crimson Tide. They are currently on the outside looking in after making the SEC Championship in six of the last seven years.

South Carolina vs. No. 7 Clemson

Like Alabama, Clemson will need some help and will need to win out if they want a spot in the CFP. Their only loss came against Notre Dame, and they will play South Carolina who is coming off an upset win over Tennessee. Clemson, though, is also set to play in the ACC Championship regardless of their result on Saturday.

Georgia Tech vs. No. 1 Georgia

No. 9 Tennessee vs. Vanderbilt

Florida vs. No. 16 Florida State

Nebraska vs. Iowa/ Purdue vs. Indiana