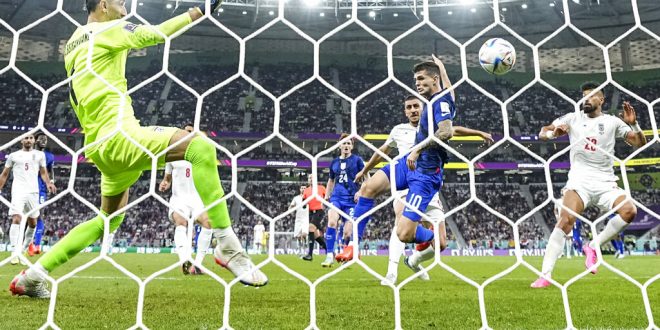 Christian Pulisic of the United States scores his side's opening goal during the World Cup group B soccer match between Iran and the United States at the Al Thumama Stadium in Doha, Qatar, Tuesday, Nov. 29, 2022. (AP Photo/Manu Fernandez)

The U.S. Men’s National Team has defeated the Iran National team in the group stages of the World Cup and will advance to the Round of 16.

The men’s team came into this world cup with high but limited expectations as one of the youngest teams in the tournament. However, the U.S. had a great chance to advance from the selection in a group with England, Wales and Iran.

The men’s team started the World Cup slow with a 1-1 tie with Wales and a 0-0 tie with England. Because of this, the U.S. entered the match against Iran with a win-or-go-home situation. Iran just needed a tie or win to keep its hopes alive.

Coming into the match, the U.S. was favored to win but not by much, and the odds of tying were similar to those for a win. The start of the game was very one-sided, with the U.S. controlling the time of possession almost 2:1 to that of Iran. The red, white and blue was also very aggressive, taking many shots on goal to keep pressure applied.

This aggression was eventually rewarded. In the 38th minute, striker and American star Christian Pulisic scored the first and only goal of the game off a header from Sergiño Dest. However, this goal came with a price. Upon scoring, Puisic collided with Iran’s goalie, where the goalie’s abdominal area struck him. Pulisic left the match and did not return. The U.S., however, kept up the aggression heading into the half, not allowing Iran much time for possession or chances to tie it up.

Coming out of the half, it looked like much more of an even playing field than in the first. Iran tied up the time of possession, however, it could not keep up the aggression the U.S. showed in the first half and would eventually fell 1-0 to the U.S. at the final whistle.

Team USA now has four matches sitting between it and the World Cup. With the win against Iran, both England and the U.S. will advance to the Round of 16 in the competition. The U.S. will play against the Netherlands Saturday at 10 a.m., while England will take on Senegal Sunday.

The Round of 16, also known as the knockout round, now makes every game win or go home.

Previous Deshaun Watson Back in Action after 700 Days Off
Next United States Beats Iran, Advances To World Cup Knockout Round