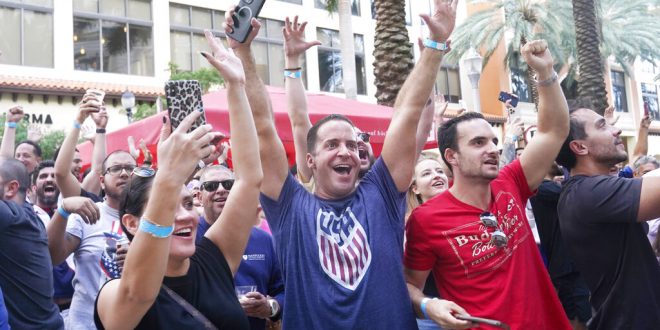 The United States beat Iran 1-0 at Tuesday’s World Cup match. The win means the American side will advance to the knockout round, where it will play the Netherlands.

The United States Held the Defense

The match’s lone goal came in the 38th minute. USMNT captain Tyler Adams received the ball at midfield and shot it over the top to Sergiño Dest. Dest crossed the ball in to Christian Pulisic, who guided it in.

Iranian keeper Alireza Beinranvand clobbered into Pulisic during the goal, injuring the left-winger. Pulisic went to the ground for several minutes before being helped off by training staff. Pulisic would return to the field to finish the first half. Brendan Aaronson replaced the forward at halftime.

“No update on [Pulisic’s] status,” said coach Gregg Berhalter after the match. Later, Pulisic himself did confirm via Snapchat he would be available for Saturday’s knockout round match.

Several other United States players were injured in the match, including striker Josh Sargent. In an attempt to avoid a challenge, Sargent jumped over Iranian defender Majid Hosseini. The striker landed on the ball awkwardly and crumbled to the ground. The severity of Sargent’s injury is unknown.

The match grew intense toward the end, as Iran made a late push to score. In the 98th minute, a ball was played over the top to Iranian forward Mehdi Taremi. It, however, got snuck between Matt Turner’s legs, but Antonee Robinson was able to clear the danger.

During the chance, Taremi went down inside the American box and Iranian players pled for a penalty. After a brief review, referee Antonio Lahoz ruled Taremi went down too easily, so play continued. The United States maintained momentum the rest of the way, hanging on for the 1-0 victory.

Following the group stage, the United States finishes with four points from their three matches, good enough for second place in the group. The USMNT will face the Netherlands on Saturday in the knockout round. Once again, loser goes home.

Connor O'Bryan is a world soccer reporter for ESPN Gainesville. He also sometimes covers baseball and other sports. He has previously written for WUFT Gainesville and for Atrium Magazine. Connor also cohosts the "Off The Bar Podcast", a student driven podcast that focuses on the global soccer landscape.
@ConnorOBryan3
Previous U.S. Men’s National Team Advances
Next Seven players and two coaches from SEC named award finalists

Somewhere in the air at Al Thumama Stadium, the future of the U.S. Men’s National …