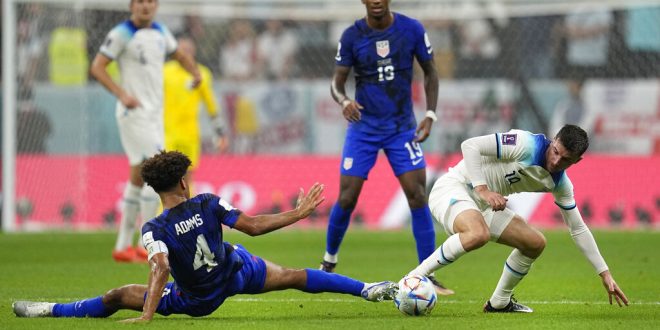 Tyler Adams of the United States and England's Mason Mount battle for the ball during the World Cup group B soccer match between England and The United States, at the Al Bayt Stadium in Al Khor, Qatar, Friday, Nov. 25, 2022. (AP Photo/Abbie Parr)

Somewhere in the air at Al Thumama Stadium, the future of the U.S. Men’s National Team will be up for grabs on Tuesday.

A 0-0 draw against England, magnified by Iran’s 2-0 win over Wales.

The scenario is now as clear as ever for Gregg Berhalter’s men: It’s now or not for another four years.

It comes down to a matchup that extends well beyond the confines of the pitch.

History, years of work, and months of preparation will be on the line as Group B closes with the USMNT Vs. Iran.

A win for the Star and Stripes will put them into the Round of 16, anything else puts Iran through for the first time ever.

HAJI WRIGHT with the start up top for @USMNT– only change. Big call… he’s been red hot 9 goals in Turkey- only his 5th cap! USA VS ENGLAND 2 PM EST FOX pic.twitter.com/BlyoPsyeFS

Berhalter has turned to his trusted 4-3-3 all tournament and the same will be expected against Iran. But who plays nine? Haji Wright and Josh Sargent have gotten a start, but both have failed to be goal threats. Could Jesús Ferreira be a viable option? Or is a false nine Christian Pulisic the last lifeline for Berhalter? It’s come down to question marks with the tournament on the line.

We know what we have to do. pic.twitter.com/zYNgjz00pu