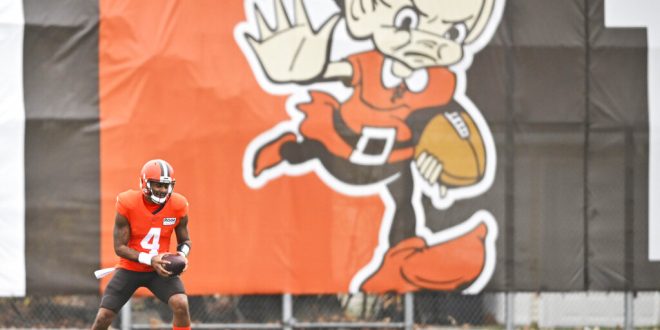 Derrick Deshaun Watson has officially been added to the Cleveland Brown’s roster after serving an 11-game suspension. He will return Sunday Dec. 4 against the Houston Texans.

Watson was selected in the first round of the 2017 NFL Draft by the Houston Texans after playing for Clemson, leading it to a National Championship in 2016. He was then traded to the Cleveland Browns for an extensive package including three first-round draft picks on March 18.

Two dozen female massage therapists accused Watson of sexual misconduct during sessions. This costed him an 11-game suspension, a $5 million fine and a mandatory treatment program. Last time he saw the field was Jan. 3, 2021, against the Texans. Watson was not indicted on criminal charges by two grand juries and reached financial settlements in 23 of 24 civil lawsuits. He is believed to be the first player fined under the NFL’s personal conduct policy.

Watson, who made $10.5 million from the Texans last year without playing a game, is predicted to earn $78.81 million between the summer of 2020 and March 31 of next year. That number including the $5 million fine.

Fans were not happy with the contract structure, but Cleveland claimed it could not have organized it any other way. Some say they believe a player getting a pay raise after assaulting 26+ women is absurd, while others state it is standard NFL business. Atlanta, Carolina and New Orleans also did not seem to care, as they all tried to trade for Watson.

As for Deshaun’s accusers, ten of them, including their attorneys, will be in the stadium watching the quarterback for the first game back from his suspension. All clients were invited, but some declined.

About 10 of the women who accused Deshaun Watson of sexual harassment and assault will attend the Browns-Texans Sunday for Watson's return from suspension.

Here’s what Brown’s head coach Kevin Stefanski had to say about Watson returning this Sunday.

Watson is set to start Sunday with five more games following. This will be his first time seeing the field in two years.

Talia Baia is a sophomore at the University of Florida studying journalism with a concentration in sports and media.
@talia_baia
Previous Florida Takes the NHL: Panthers and Lightning
Next U.S. Men’s National Team Advances