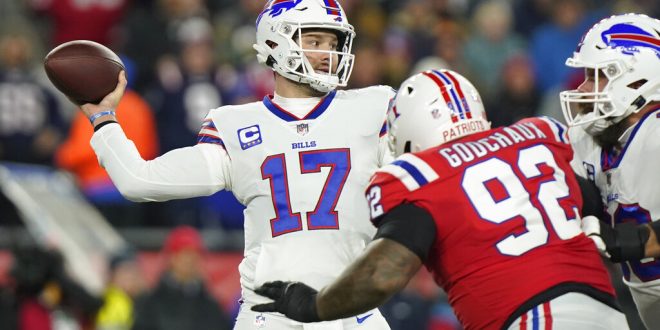 Bills’ Quarterback Josh Allen threw for 223 yards and two touchdowns in the victory, with running back Devin Singletary adding a rushing touchdown.

The Bills have now won three straight games, after losing to the Jets and Vikings in back-to-back weeks.

As for the Patriots, this was their second straight loss on Thursday Night Football, and have dropped to the number nine seed in the AFC.

Allen to Diggs Connections Remains Lethal for the Bills

As the narrative has been ever since he was traded to Buffalo in 2020, Stefon Diggs once again balled out when the lights were brightest.

Diggs finished with seven total catches for 92 yards last night, while connecting with Josh Allen for an eight yard touchdown in the second quarter.

This was Diggs’ 10th touchdown of the season, tying his career high for most touchdowns in a season that he set in 2021.

And he still has five games left in the regular season…

While he and Josh Allen were able to get things going through the air, the Bills controlled the game by effectively running the football.

This was the fourth straight game that Buffalo scored at least 24 points.

Even against an average ranked passing defense at home, the Patriots offense failed to produce enough to win.

Patriots’ Quarterback Mac Jones threw for 195 yards, with 68 of them coming in garbage time on the last drive of the game.

The one highlight of yesterday’s game came in the first quarter, when defensive back Marcus Jones scored on a 48-yard receiving touchdown.

Aside from this, things were not pretty in Foxborough.

The Patriots recorded 242 total yards of offense, while scoring ten points for the second time in three weeks.

They’ll look to get things going as they head to Arizona for another primetime showdown with the Cardinals.

As for the Bills, they will return home next week as they host the New York Jets, in a closely contested race for first place in the AFC East.