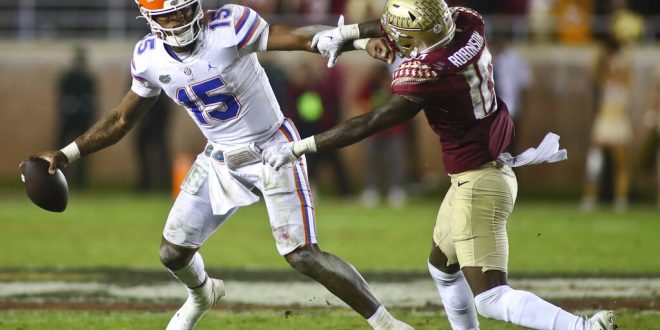 As the college football season nears a close, NFL draft talks are heating up. According to projections, many NFL teams have their eye on Florida’s standout quarterback Anthony Richardson.

Throughout 12 starts this season, Richardson threw for 2,549 yards with 17 passing touchdowns. Additionally, he ran for 654 yards to go along with nine rushing touchdowns on the season. Of course, these stats are extremely impressive, but they aren’t the best we’ve seen in the past few years of college football. So, why is he such a highly touted prospect?

Richardson’s skillset and size is like no other. Standing at 6’4″ and 232 pounds, Richardson is bigger than your average NFL starting quarterback. Not only is his size a huge advantage, but he uses it to become more explosive. He’s harder to tackle than most running backs, while his elusive speed allows him to zoom past defenders.

Richardson’s arm strength and accuracy is also a huge positive to his game which most quarterbacks can’t match. Although his decision making can improve on the field, his ability to throw the long ball is better than most in all of college football.

Although some analysts consider Richardson to play similar to Dak Prescott, Josh Allen is another popular comparison. However, perhaps the most common comparison Richardson receives is former NFL MVP Cam Newton. They are very similar in size, speed, agility and arm strength.

Where Will Anthony Richardson Get Drafted?

Drafting Richardson could turn out to be an incredible move by one NFL franchise if he cashes in on his full potential. That being said, Richardson has some work to do before he thrives in the professional world. Most mock drafts have Richardson getting drafted as the fourth or fifth quarterback taken in the 2023 NFL draft, with some even projecting him to be top three. Depending on which teams are looking for quarterbacks early in the draft, Richardson has a chance to be a first round pick. No matter how many quarterbacks get drafted ahead of him, it is extremely unlikely that Richardson gets picked after round two. This will be an amazing achievement for the Gainesville-native following his college career.