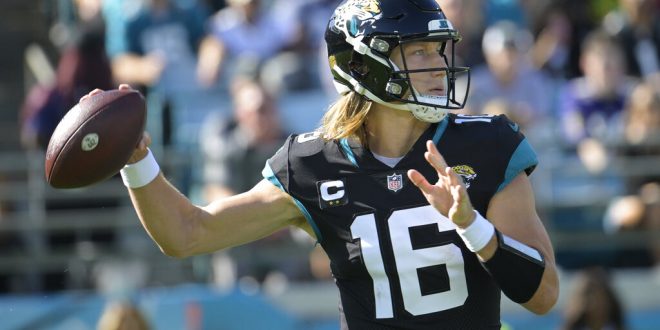 Jacksonville Jaguars quarterback Trevor Lawrence (16) sets back to pass during the first half of an NFL football game against the Baltimore Ravens, Sunday, Nov. 27, 2022, in Jacksonville, Fla. (AP Photo/Phelan M. Ebenhack)

The Jacksonville Jaguars hit the road to travel to Detroit to play the Lions at 1 p.m. on Sunday. The Jags are coming off of a nail-biting comeback win against the Baltimore Ravens in Week 12. With 12 seconds left, the Jags scored a touchdown and converted the two-point conversion to beat the Ravens 28-27.

Jacksonville’s season has had glimmers of hope and exciting moments. With all their losses being a differential of fewer than 10 points, the Jags have competed in all of their games. On Sunday, they showed their grit in the fourth quarter, down by seven with two minutes to go. The Jags completed the comeback, going 75 yards on 10 plays to earn their fourth win of the season.

Quarterback Trevor Lawrence had an impressive performance on Sunday, completing 29 of his 37 passes for 321 yards and three touchdowns. Another massive target for Jacksonville has been Zay Jones, who had 11 receptions on 14 targets with 145 yards. However, Jones and running back Travis Etienne Jr. are questionable for the game Sunday due to injuries.

The Jags’ offense looked unusual in the beginning of the game in last week’s win. While Christian Kirk and Etienne Jr. lead the team in receiving and rushing yards, respectively, they had a poor outing in the win. Etienne only grabbed three yards before leaving the game early, and Kirk had just 46 yards on four receptions.

The Lions have been improving and they gave the Buffalo Bills a run for their money in their last game on Thanksgiving. The Lions defense kept Josh Allen and the Bills offense under control for the majority of the game. Despite losing to Buffalo on a game-winning field goal, the Lions showed they can hang with one of the best teams in the league.

Jared Goff had a solid game with 240 yards in the air and two touchdowns, going 23-for-37. Wide receiver Amon-Ra St. Brown led the team in receiving yards against the Bills, hauling in nine catches for 129 yards and one touchdown.

The whole group was fired up for @AlexAnzalone34!

All the sights & sounds from Thanksgiving ⤵️

The leading rusher for the Lions, Jamaal Williams, had 66 yards and a touchdown in last week’s win. The Lions have increased Williams’ carries on the goal line, and if they want to beat the Jags, they’ll have to continue their ground game success.

Kickoff in Detroit is set for 1 p.m. on Sunday.