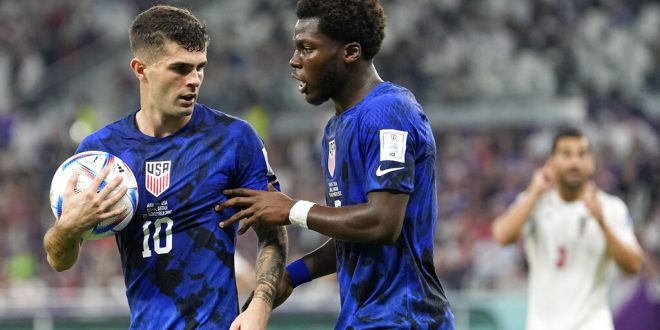 After defeating Iran 1-0 on Tuesday, the United States finished second in Group B, sending the squad to the round of 16 of the FIFA World Cup. On Saturday, the United States face the Netherlands at 10 a.m. in the first stage of the bracket. Although the Americans are filled with confidence after their win, the Netherlands will pose as a tough opponent. The team finished at the top of Group A after beating Senegal and Qatar. The victor of the match will advance to the quarterfinals and face the winner of the Argentina vs Australia game.

The major news surrounding Saturday’s match is the health of USMNT forward Christian Pulisic. Against Iran, Pulisic dove in front of the net to score a go-ahead goal via a pass from Sergino Dest. However, the dramatic goal came at a cost, as Pulisic collided hard with the Iranian goalie. The forward stayed down, clutching his abdominal area and eventually left the match. He did not return. The injury was officially labeled as a pelvic contusion, and Pulisic was listed as day-to-day.

There was a concern that Pulisic, who has provided a massive impact to the teams offense, may not be able to play Saturday. However, Pulisic is officially cleared to play and is expected to take the pitch. His fiery presence has kept the rather sluggish U.S. offense alive, and his health against the Netherlands is a huge factor in this match.

Through their first three matches, the Netherlands have not lost, with victories over Senegal and Qatar, and a draw with Ecuador. Even though they finished at the top of Group A, criticisms have been made of the relatively slow start for the squad thus far. In their matches, the offense seemed a bit dull in comparison to the squad’s usual high-paced attack.

Despite not meeting expectations, the Netherlands do have serious weapons on offense that could exploit the U.S. defense. Cody Gakpo, a 6’4” forward, has been the Netherlands’ star, thus far. Gakpo brings explosiveness and speed to the offense and has scored in every World Cup match so far, including the go-ahead header that propelled the team over Senegal. Alongside Frenkie de Jong and Davy Klaassen, Gakpo is able to get opportunities to score fairly consistently. With his height and ball control, Gakpo will be the main concern on Saturday for the United States.

Cody Gakpo gets things started for the Netherlands 🇳🇱 pic.twitter.com/rV8MmgCgQo

Even though Gakpo has been one of the most dominant forces in the tournament, the U.S. defense has also shined. The squad has allowed only one goal in their three matches, keeping both England and Iran scoreless. The midfield trio of Tyler Adams, Yunus Musah and Weston McKennie have concealed offenses and have allowed only a handful of shots on goal.

Goalie Matt Turner has performed exceptionally well. Turner has five saves and two clean sheets through three games. The defense’s ability to only allow a few shots on goal per game combined with Turner’s goalkeeping will be an interesting matchup against the Netherlands offense. If the U.S. wants to advance in the tournament, midfielders and backs need to conceal Gakpo and do everything they can to keep the ball away from him.

Something worth watching is the health of the Netherlands team. According to published reports, the squad’s manager, Louis van Gaal, told media that players had been experiencing “flu symptoms.” Van Gaal recently described the potential influenza outbreak as “worrying” ahead of their Saturday match. Van Gaal also canceled Thursday practice in order to give players time to rest and recover. It is not clear which players are ill or what the specific illness is. However, this could pose as an issue for the squad if key players are out.

While there are a lot of variables ahead of this game, expect this match to be tight. Advantages in this game are likely going to come down to explosive or broken plays. Both squads have solid defenses and weapons they can use, so this is going to come down to which team can capitalize on the opportunities they are given.