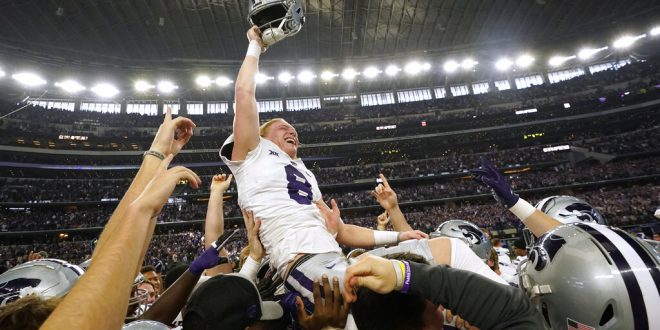 TCU entered the game 12-0, with hopes of continuing their perfect season and essentially clinching a CFP spot. The Wildcats improved to 10-3 and secured their first conference championship since 2012.

The first half was slow for both teams compared to the Big 12 football we’ve seen all year long.

TCU opened the scoring with an excellent eight-play, 92-yard drive after Kansas State punted on the game’s opening series. Max Duggan connected with Taye Barber on a short pass to the endzone to give TCU their first lead. The Horned Frogs struggled on offense for much of what remained in the first half.

The Wildcats answered back a few drives later, converting a fourth down in the redzone to even up the game.

Kansas State struck again thanks much in part to a 40-yard run by Malik Knowles to take the ball deep into Horned Frogs’ territory. Quarterback Will Howard punched it in from a yard out to give the Wildcats a 14-7 lead.

TCU missed a big opportunity after Duggan connected with his top receiver Quentin Johnston for 31 yards, as Johnston had the ball punched out and the Wildcats recovered. The Horned Frogs forced a three-and-out on the ensuing possession and then settled for a field goal in the final few moments of the half.

After a back-and-forth half, Kansas State headed into the locker room up 14-10.

After a three-and-out by the Horned Frogs to open the second half, Kansas State took just four plays to find the endzone again. Will Howard found RJ Garcia II in the back of the endzone for his first touchdown catch of the season to put the Wildcats up 11.

TCU answered back as Kendre Miller extended his touchdown-scoring streak to 13 games, and cut the lead to four.

TCU has had to complete multiple late-game comebacks this year and it was only fitting that Duggan and company would need another to win the Big 12 Championship. Duggan was visibly shaken up late in the fourth quarter, often taking a long time to get off the turf.

Nonetheless, the Horned Frogs responded with a much-needed field goal to make it a one-possession game. It was then up to the defense.

Despite giving up two second-half scores, the TCU defense stood its ground and forced a punt to give Duggan another chance to tie the game.

Down late once again, Max Duggan executed potentially his best drive of the season. The Heisman hopeful rushed for 95 yards on the drive alone, including a gutsy eight-yard touchdown run.

TCU was forced to go for the two-point conversion with the Horned Frogs trailing 28-26.

Duggan hobbled back onto the field and found an open Jared Wiley to tie the game with under two minutes to go.

Kansas State was held to a punt on their next drive, and TCU took a knee as the clock expired.

Overtime for the Championship

After four quarters found both teams knotted at 28, TCU and Kansas State headed back to their respective sidelines in anticipation of overtime.

The Wildcats won the coin toss and elected to start on defense, giving Duggan and TCU the ball.

Kendre Miller quickly worked TCU inside the Kansas State 10-yard line in just two plays. Duggan then had what appeared to be a magical run, but he was dragged down inside the one-yard line to bring up third and goal.

He was again handed the ball but stopped shy of the goal line, despite reaching the ball out towards the goal line in desperation at the end of the play. Fourth down.

The Horned Frogs had the option to kick the field goal and take the three-point lead but elected to go for it.

Duggan lined up under center and handed the ball left to Miller. The Kansas State defensive line ate up the TCU blocks, and Miller met a wall at the goal line. The Wildcats forced the turnover on downs and were a field goal away from the title.

Kansas State played their drive conservatively, running on all five plays leading up to their field goal attempt.

Will Howard moved into the center of the field around the 13-yard line and went down to set up the potential game-winning field goal.

Ty Zentner stepped onto the field ready to kick the 31-yard field goal. The snap and hold were good, as was the kick as it went directly through the middle of the uprights.

With a win, TCU was almost certainly guaranteed a CFP spot. That all changes now.

While championship weekend is still in progress, TCU’s loss shakes up the CFP picture quite a bit. Especially following USC’s loss Friday night.

Assuming Michigan and Georgia win their respective conference championship games, the No. 3 and No. 4 spots are now wide open, with several teams in the hunt.

TCU remains in play for No. 4 given its impressive resume and conference championship appearance. College football analyst Kirk Herbstreit, who was calling the Big 12 Championship, spoke very favorably of TCU and its deserving of a CFP despite the recent loss. As did Kansas State head coach Chris Klieman. He opened the post-game press conference by stating TCU deserves a spot in the CFP.

Chris Klieman opens his presser saying that it feels great to be a Big 12 Champion and follows that immediately by saying TCU should be in the College Football Playoffs pic.twitter.com/Q6p8OZBL9L

Ohio State, who entered championship weekend at No. 5, almost appears to slip into the field of four with both TCU and USC losing. Although, Ohio State did not play this week following their blowout defeat to Michigan, which eliminated them from Big 10 Championship contention.

No. 6 Alabama will also be considered. However, the Crimson Tide has two losses and would need to be looked at very favorably to get a CFP berth. If they find themselves in the top four, Alabama will be the first two-loss team in the CFP.

Kansas State, ranked at No. 10 coming into the week, will certainly rise in the rankings and likely earn a prestigious bowl berth. 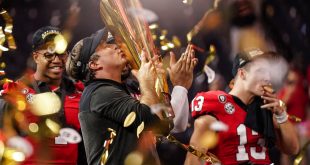