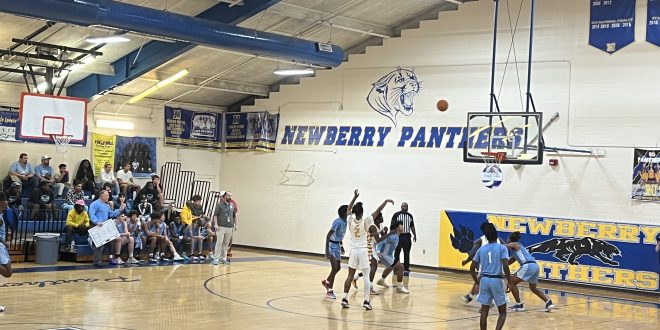 Without hesitation, Newberry guard Mason Smith shot the ball from the left corner with the clock ticking into the final breaths of the game. Despite his shot being contested, the three went in and gave the Panthers a marginal lead late in double overtime.

The Newberry Panthers lost their season opener in double overtime to the Chiefland Indians Thursday, 64-63. The Panthers trailed throughout most of this game but always kept themselves within striking distance.

Defensive tactics and the Scippio effect to start

Newberry ran a high 3-2 zone in the opening quarter, which pressured the Indians into shooting inside the paint for better opportunities.

Unfortunately for the Panthers, Chiefland adapted quickly to the defense and started to attack the basket to grab an early 7-4 lead through four minutes of play.

Newberry forward Juwan Scippio came off the bench to produce a scoring run of his own for the Panthers. Once on the court, he scored a three and followed it with another one at the right wing to give Newberry a 14-12 lead with 1:21 remaining in the first quarter.

The Panthers kept this small lead through most of the first half of the game thanks to the rise in intensity between the two squads defensively. Newberry varsity head coach Patrick Green was even chanting “defense” to get the crowd into the game.

After almost three minutes of lackluster offense to start the second quarter, the Indians scored a layup after multiple offensive rebounds to tie it 17 a piece.

Chiefland took advantage with their size down low in the front court, grabbing multiple rebounds to put themselves back on top of Newberry, who made minimal runs offensively to match the Indians pace in offense.

The Panthers, looking frustrated in the dying minutes of the first half, gave up its lead to be down 26-24 at halftime.

Panthers guard Mike Moore, who didn’t score until a made three in the middle of the second quarter, awakened offensively by opening the quarter with a catch-and-shoot three. The Indians answered back with a three of its own, getting the shootout underway.

After a few back-and-forth exchanges of points, the Panthers finished the third quarter on a 4-0 scoring run within 58.5 seconds, leading 40-38 going into the fourth quarter.

The last quarter of regulation was one of pure determination and hustle. The two conference opponents dived for every loose ball and pushed the envelope as both squads tried to orchestrate a run to fight past each other’s high-pressure defense.

The Panthers would be the first to crack the code.

On a 6-0 scoring run, that was capped off by a Moore layup in transition going coast-to-coast, Newberry was up 49-42 with about three minutes remaining in regulation.

However, Chiefland would go on to lock down the Panthers for the remainder of the quarter and climb back to tie it at 49-49 to take it into overtime.

The OT started with a Smith turnover for Newberry. The senior guard, looking to fix his mistake, redeemed himself with a steal off of a tipped pass to take it down the court for two to score the first basket of overtime.

Rebounds were once again an issue in the overtime. Chiefland corralled three offensive rebounds in the first two minutes of OT. One of those rebounds resulted in a layup by Indians forward Jonathan Adams, also known as “Jon Jon” by parents from the Chiefland sideline, to give Chiefland a 52-51 lead with a minute left in overtime.

Fortunately for Newberry, forward Logan McCloud converted a and-1 . That, however, would be answered by another layup by Adams, who bulldozed into the paint with 18 seconds remaining in overtime to tie it 54 a piece.

No one would score the rest of the way. Both teams, exhausted from the hard battle at Newberry’s gym, would go into double overtime.

With everyone standing through the entire four minutes of additional overtime basketball, the game stood still at 60 a piece with 52 seconds remaining.

With an acrobatic layup by Adams erupted the Chiefland fans in the small venue went into a frenzy, a full launch of the ball to the right corner to the other side of the court put Smith in an opportunity he couldn’t miss. He made a quick three, nothing but net with eight seconds remaining. Indians called a timeout in the heat of the moment.

After the timeout, Adams collected the ball from the inbound and ran full sprint toward the basket.

As he made his way to the basket, two Newberry defenders hustled to stop him. Adams, driving into the left lane, laying off his shot at the backboard to make the shot as time went to zero.

The Indians, in an absolute thriller of a game, broke the hearts of Newberry fans, winning the game 64-63.

The Panthers will be back at home Tuesday at 7:30 p.m. against the Saint Francis Catholic Wolves.