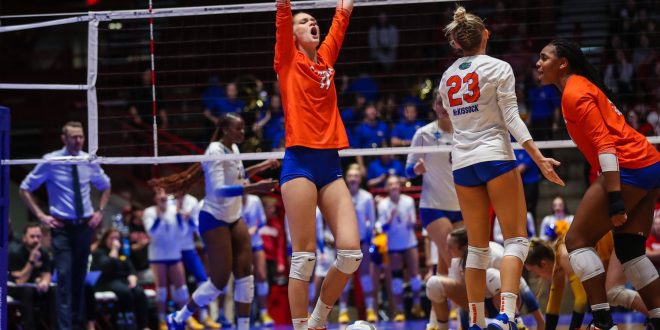 Marina Markova celebrates after a kill in a game against Pittsburgh in the NCAA Volleyball Tournament in 2022. (Photo from @GatorsVB on Twitter)

Gator Volleyball has wrapped up its season after losing to Pittsburgh yesterday. The NCAA tournament appearance extended the Gators’ streak to 32 straight seasons reaching the tournament. The Gators finished the season with a 25-6 record, securing their 25th SEC Championship in program history (all under head coach Mary Wise). Despite coming into the season with little NCAA tournament experience, the Gators certainly held their own.

Syracuse graduate transfer Marina Markova had her usual double-digit kill performance. The fifth-year player notched 15 kills, finishing with 22 double-digit kill outings this season. Markova was a crucial addition to this year’s team. After finishing top 20 in the nation for kills in 2021, she served as a key veteran presence for a young Florida team. This season, she tallied 353 kills, reaching a season-high of 18 kills against Ole Miss on November 26. Markova was named to this year’s All-SEC team.

Freshman Alexis Stucky is another newcomer that turned heads this season. The Wyoming native was the SEC Freshman of the Year. Stucky is only the second Gator freshman to reach 1,000 assists in a single season. She was named SEC player of the week twice and has been named AVCA National Division One player of the week. Stucky notched a career-high 56 assists against LSU on October 9th, she also racked up a career-high 16 digs that game.

Sophomore Merritt Beason earned All-SEC honors for the second time in her sophomore season. Beason made this year’s All-SEC team after making the All-Freshman team last season. The two-time SEC player of the week finished first on the team in points, second in kills and third in digs and blocks. The Arizona native has made an immediate impact since arriving in Gainesville.

Coach Mary Wise continues to build her legendary resume. Wise is the NCAA’s fourth-winningest coach of all time, she has the most victories out of any woman coach in Division 1 NCAA History. This season was Wise’s 31st season as Florida’s head coach. Since arriving at Florida, the program has consistently contended with the NCAA’s top teams.

Marina Markova and Rhett Robinson should be in their last years, but the rest of the team is expected to return.

Two returning players to keep an eye on next season are Sophia Victoria and Eli McKissock. Victoria finished with 10 kills against Pittsburgh, she has reached double-digit kills 10 times this season. While she isn’t nationally recognized as much, McKissock is slowly climbing the record books at Florida. She has the ninth-most digs in program history.

Tyler Carmona is a junior journalism major at the University of Florida. Originally from Miami, Tyler played football as a wide receiver at the University of St. Francis before transferring to UF.
@@TylerCarmona
Previous Bri Edwards and Her Journey with the Gators
Next Florida Volleyball Closes Season With Loss to Pitt

As their season comes to a close, Gator volleyball players are heading to Wisconsin to …