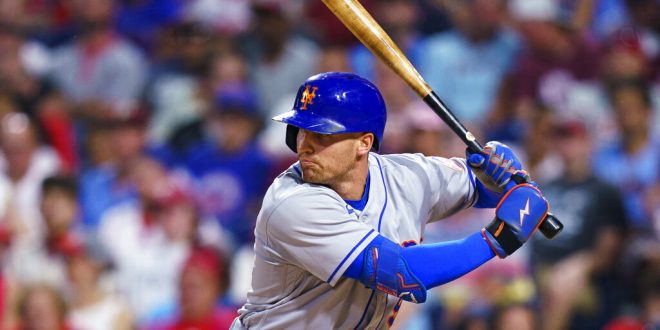 FILE - New York Mets' Brandon Nimmo bats during the second baseball game of the team's doubleheader against the Philadelphia Phillies, Aug. 20, 2022, in Philadelphia. Nimmo is staying with the free-spending Mets, agreeing to a $162 million, eight-year contract, according to a person familiar with the deal. The person spoke to The Associated Press on condition of anonymity Thursday night because the agreement is subject to a successful physical and no announcement had been made. (AP Photo/Chris Szagola, File)

With the loss of Jacob deGrom to the Texas Rangers, the Mets seemed to be in dire straights. Losing the best pitcher of his era (when healthy) would seemingly crush any franchise, especially when said pitcher talks about their exciting vision and goal of winning the World Series at his opening press conference. For many franchises, this would sting. Instead, it lit a fire under owner Steve Cohen.

The Mets have made a flurry of high profile moves since deGrom signed with the Rangers, retooling and reloading their roster for another playoff run.

New York started off with the addition of superstar pitcher Justin Verlander. Verlander, 39, signed a two year, $86.67 million contract with New York. The phenom put an end to questions regarding his long-term health following Tommy John surgery at the age of 37 by pitching a Cy Young award winning year with an 18-4 record and a 1.75 ERA. The three-time Cy Young winner and 2011 MVP will likely slot in as the No. 2 pitcher in New York behind former Tigers teammate Max Scherzer.

The Mets also picked up starter José Quintana on a two-year, $26 million deal. Quintana is coming off an excellent year with the Pirates and Cardinals, recording a career-best 2.93 ERA. He figures to slot in as the third pitcher behind Scherzer and Verlander.

The Mets also picked up a pair of relievers, trading for Brooks Raley and signing David Robertson to shore up the bullpen.

Brandon Nimmo’s free agency left a glaring hole in centerfield for New York. Nimmo hit free agency at the perfect time, coming off one of the best seasons of his career. The outfielder hit .274  while also flashing a much improved glove. Nimmo would not have been easy to replace.

The Mets reportedly talked to the Arizona Diamondbacks about centerfielder Alek Thomas to plug the hole. Arizona views Thomas as a great piece coming off a lackluster yet promising season, so they won’t trade him for cheap. The Diamondbacks reportedly asked for Brett Baty, who the Mets view as their future at third base. But New York currently has Eduardo Escobar, who is solid enough to get them through the next few seasons at the hot corner. So do you mortgage your future to win now? Many franchises would make this move. Not the Mets.

Brandon Nimmo and the Mets have agreed to an eight-year deal worth $162 million: https://t.co/slQ1PszBGO pic.twitter.com/PnujmoAQdH

New York elected to instead pay Nimmo, giving the outfielder an eight-year, $162 million contract. This allows the Mets to shore up their centerfield for the foreseeable future. Plus, why would you give up your third baseman of the future when your owner’s exorbitant wealth can solve all your problems? Cohen has money, and he’s never been shy about splashing it around.

The Mets may not be done with their offseason additions, as the club is reportedly in on Japanese star pitcher Kodai Senga. The Japanese phenom is beginning his MLB career after spending the last eleven seasons in Japan. Senga has a 2.42 ERA over those eleven seasons.

Star Carlos Correa could also be in play for the Mets. The slugger is coming off of a 5.4 WAR season in Minnesota, posting a .291 batting average with 22 home runs. While Correa is a shortstop by trade, he has previously said that he would play third base if it meant he could play next to Mets superstar Francisco Lindor, who currently mans the position. Correa would be an expensive addition, but Cohen is more than willing to open up his checkbook.

The Mets will also likely seek out another bat. Designated hitter is a weakness in New York’s lineup. While the Mets figure to use a DH-by-committee platoon system regularly employed by manager Buck Showalter, they could certainly use an upgrade at the spot. Deadline acquisitions Daniel Vogelbach and Darin Ruf were lackluster at DH, and prospect Mark Vientos is too raw to start this season.

Dodgers free agent Justin Turner could be an option. The third baseman is coming off hitting .278 with 81 RBI’s. Furthermore, this could be a homecoming for Turner, who spent part of his 2010 season in New York.

Matt Carpenter could be another option. The 37-year-old utility-infielder is coming off a massive comeback year, sporting a 2.4 WAR and a .305 batting average. Adding Carpenter would also give the Mets depth throughout their midfield, particularly at a relatively weak third base.

Connor O'Bryan is a world soccer reporter for ESPN Gainesville. He also sometimes covers baseball and other sports. He has previously written for WUFT Gainesville and for Atrium Magazine. Connor also cohosts the "Off The Bar Podcast", a student driven podcast that focuses on the global soccer landscape.
@ConnorOBryan3
Previous The Birth of a Juggernaut: The Rise of the Houston Astros
Next CFB Awards Announced