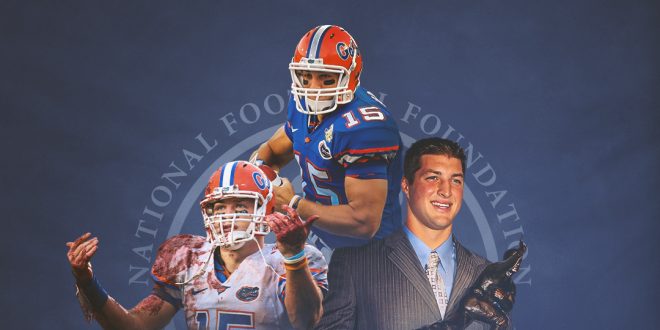 Tim Tebow was elected into the College Football Hall of Fame on Monday. He is the 1oth Gator player to be inducted. Florida has had seven inductees since 2006, the most by an SEC school.

This crowning achievement will be another notch in Tebow’s belt of successes. Tebow was a consensus first team All American in 2007. In the same year, he claimed the Heisman Trophy as a sophomore and was the youngest in college football history to do so.

Additionally, Tebow was a Heisman finalist in 2008 and 2009. The Gator legend won the Maxwell Award, not only in 2007, but the following year too. Tebow also won the Davey O’Brien Award in 2007.

Tebow led the Gators to two BCS National Championships and earned MVP for the 2008 BCS national title game. He also set 28 school records during his time at Florida, including an SEC record 55 rushing touchdowns. This record surpassed Georgia running back Herschel Walker.

Tebow was a three time SEC Offensive Player of the Year and led the Gators to an SEC title in 2006 and 2008 and three SEC East titles.

Throughout his career, Tebow threw 9,285 yards and 88 touchdowns, and rushed 2,947 yards and 55 touchdowns in his career. His 48-7 career record made him part of the winningest senior class in SEC history. He was also the first player in NCAA history to rush and pass for at least 20 touchdowns in a season.

The University of Florida Hall of Fame inducted Tebow in 2020 and the Florida Football Ring of Honor inducted him in 2018. His bronze statue stands outside of Ben Hill Griffin Stadium beside Steve Spurrier and Danny Wuerffel.

The moment @TimTebow found out he made it in his first year of eligibility was special ❤️ pic.twitter.com/hLveOM2bCT

Tebow now lives in Jacksonville, Florida and works as a philanthropist, motivational speaker, author, film producer and broadcaster with ESPN and the SEC Network. Tebow and the rest of the 2023 inductee class will be inducted into the Hall of Fame during the 65th NFF Annual Awards Dinner on Dec. 5, 2023 in Las Vegas at the ARIA Resort and Casino. 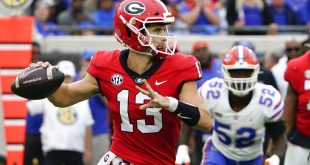