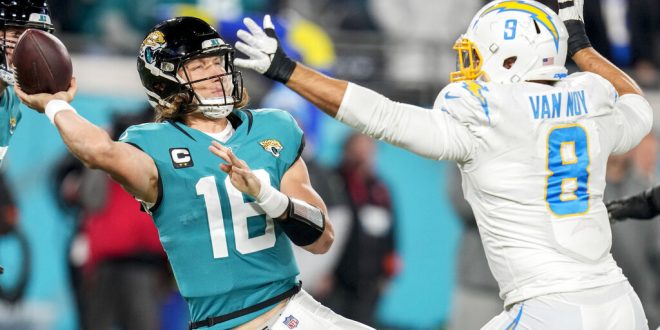 After an emotional comeback game against the Los Angeles Chargers, the Jacksonville Jaguars will visit the Kansas City Chiefs on Saturday for the NFL playoffs Divisional Round. The game is set to kickoff at 4:30 p.m.

The AFC West Champion Chiefs were on a bye week while the Jags won a nail-biting comeback game in the wild card round last week.

As the top seed, Kansas City will put up their best on Saturday, especially after watching the comeback from Jacksonville. The Chiefs, who are 14-3, finished the regular season on a winning streak. They not only have the home advantage but also the advantage of rest. They won their seventh straight divisional title and aim to get to their fifth straight AFC title game.

The Chiefs not only have the stats but also are led by their star quarterback Patrick Mahomes. He has yet to fail to reach the AFC title game since his start as Andy Reid’s quarterback. Mahomes has 5,250 passing yards and is only two passing touchdowns away from tying Terry Bradshaw for tenth on the NFL all-time Playoffs playlist.

Can the Jaguars beat a top seed?

Although the Chiefs have the numbers and the win during their last matchup against Jacksonville, the Jaguars are carrying momentum to Kansas City.

Since losing to Kansas City in November, the Jaguars have won seven of eight games, including their last six.

They shocked football fans everywhere last week when they overcame a 27-0 deficit against the Chargers and won 31-30. It was the third largest comeback in NFL history.

Quarterback Trevor Lawrence proves that the Jags shouldn’t be underestimated. He threw four interceptions in the first half against LA and followed with five consecutive scoring drives to win the game.

From Weeks 9-18, Lawrence ranked first in the NFL in passer rating, second in completion percentage and third in interception percentage.

Kansas City will be prepared for the underdogs, and Jacksonville will have to bring their A game in order to claim the victory.