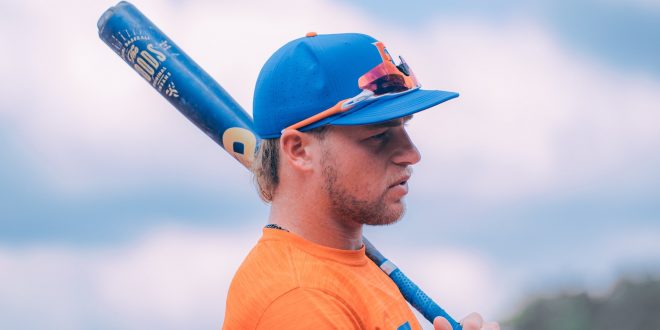 Colby Halter practices with the baseball team as they prepare to open their fall season. Photo from @GatorsBB on Twitter.

Colby Halter grew up a Gator baseball fan and has fond memories of attending practices and games. Now, Halter is donning the blue and white pinstripes as he, along with the Florida baseball team, looks to take the next step in 2023.

Last year, Halter slashed a respectable .240/.338/.380 in 65 games. He played all over the infield and expects to be the starting third baseman for the Gators this season. Halter had the opportunity to go pro after last year, but instead decided to come back for his junior year. Returning to Gainesville was a major decision, and he will play another season in a place that is special to him.

Growing as a player

This will be Halter’s third year playing for Florida, and he has grown tremendously in his time with the program. All facets of his game have improved since stepping on campus thanks to coaching, countless hours of practice and maturation. Halter spent his summer working tirelessly on his swing and has constantly improved his defense over the years. His intangibles and mental strength have also improved since arriving on campus in 2020.

The Gators are hoping for a much more successful campaign this year. Florida was bounced by Oklahoma in the Gainesville Regional last season, something that Halter has not forgotten about.

The Gators have a much more experienced squad this year and rank in the top 10 in every preseason poll that has been released so far. Led by star outfielder Wyatt Langford, Southern Miss transfer Hurston Waldrep and experienced returnees like Halter, the team has the potential to be playing in Omaha. The Gators will play their first game against Charleston Southern on Feb. 17, but they’ll be back in action this weekend. Condron Ballpark will host practices and scrimmages that will be free and open to the public on Friday, Saturday and Sunday.