The Gators took the series this past weekend at Tennessee winning Friday and Sunday.  Junior Nolan Fontana batted 6-for-9 on the weekend with five walks and junior Brian Johnson was 6-for-12 with six RBIs, two doubles and a homer.

The Gators will host their next nine games starting on Tuesday night with Georgia Southern (22-16, 10-8). The Eagles are coming off a series victory over Appalachian State and have won nine out of ten games this month.  In the weekend series, the Eagles combined for 20 runs and 26 hits in the two wins.  Leading the effort was freshman outfielder Hunter Thomas with four hits, three runs and three RBIs and finished the series with a .500 average.

Last year Georgia Southern shut out Florida 7-0 with impressive pitching.  Chris Beck and Josh Adams pitched the first five scoreless innings before being relieved by Matt Murray who pitched four hit-less innings.  The victory against the Orange and Blue last season was just the Eagles third win in 12 tries against the Gators.

If you can’t make it out to McKethan Stadium this Tuesday night, make sure to catch all the action right here on WRUF Sportsradio 850 starting at 7:00 PM. 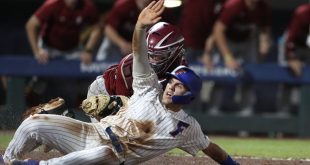