The Florida football team took to the field over the weekend for their second scrimmage of the year and head coach Will Muschamp seemed pretty happy with most of his guys. The head honcho was very pleased with the offense’s overall performance, but said neither Jeff Driskel nor Jacoby Brissett really stepped up more than the othe at the quarterback position.

While the quarterback battle continues, so to does the cornerbacks duel.  Muschamp will get to choose between Marcus Roberson, Cody Riggs, Loucheiz Purifoy, Jaylen Watkin, Brian Poole, and De’Ante “Pop” Saunders for the starting spots.  Muschamp says all of these guys have the potential to bring something special to the table this season.

The Gators are also going to have their choice at wide receiver, a position that many fans were disappointed in last year due to the inconsistency of play. Throughout the scrimmages and practices, however, Muschamp has seen flashes of brilliance that give him hope for success at that position.

With all this talent laid out for the Gators it’s going to be interesting to see who will land those starting spots for the September 1st opener against Bowling Green.

Previous Report: Driskell Hurt At Practice But UF Does Not Confirm Report
Next Demps Files Papers To Enter NFL 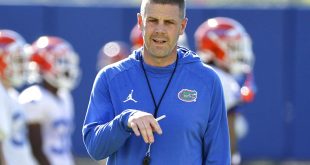 The Florida Gators Football program is going through somewhat of a “rebuild”. Since the takeover …