Florida Falls To Georgia in Jacksonville 17-9

The win allows Georgia to control its own fate in the SEC East; wins over Ole Miss at home and Auburn on the road will give the Bulldogs the title and a trip to the SEC Championship Game.

Florida (7-1, 6-1 SEC) stayed in the game despite committing six turnovers.  Georgia (7-1, 5-1 SEC) did a nice job as well of loading the box to take away Florida’s run game and did so by allowing Gator tailback Mike Gillislee to rush for only 77 yards on 22 carries.

That meant Florida would have to damage through the air but that was not the case for most of the night as sophomore quarterback Jeff Driskel went 14 of 26 passing for 185 yards but he fumbled twice and threw two interceptions while being sacked five times.   He threw a critical interception near the end of the first half in the red zone that didn’t allow kicker Caleb Sturgis to attempt a field goal that would have given the Gators the halftime lead.

Despite all the problems, Driskel led Florida down the field toward the end of the game on a nice 9 play, 74 yard drive that ended when tight end Jordan Reed fumbled at the Georgia five yard line and the Bulldogs recovered the ball in their end zone.

Florida plays its final SEC game of the year Saturday when it hosts Missouri, a winner Saturday over Kentucky. 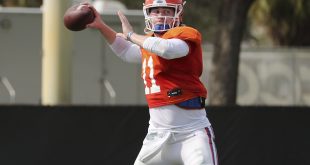 It’s Florida-Georgia weekend where the implications are as big as they usually are. The winner …