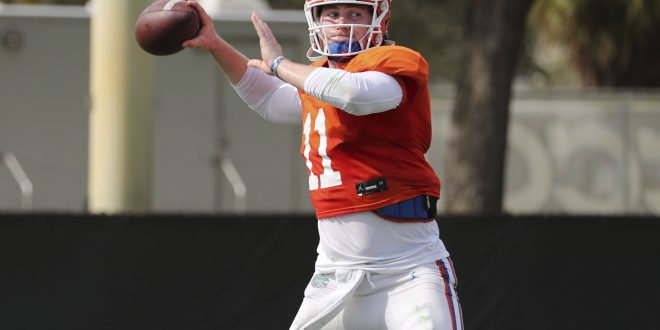 It’s Florida-Georgia weekend where the implications are as big as they usually are. The winner will take first place in the SEC East, and their playoff hopes become even brighter. The game takes place in Jacksonville at 3:30 p.m.

The last three meetings between these teams have been all Georgia, on the scoreboard and statistically. Florida has averaged 13.7 PPG, 267.3 YPG and five turnovers. While Georgia has averaged 34 PPG, 406.7 YPG with only one turnover. The winner of this game will be determined by which team runs the ball best. The team that has rushed for more yards in the Florida-Georgia contest has won the game the last 14 seasons. Last year, UGA outrushed Florida 119-21.

This year, Georgia has attempted 210 rushes to Florida’s 112. But, the YPG on the ground is only separated by 42 yards in which Georgia leads 175 to 133. One team may run more, but the other runs more efficiently.

What Georgia Needs to Do to Win

If it ain’t broke, don’t fix it. The Bulldogs need to continue to run the ball. They have one of the best groups of running backs in the country. Zamir White, James Cook and Kendall Milton. White is the main back who has 90 carries for 402 yards and six touchdowns this season. Rushing the ball has been a strength for Georgia, opposite of Florida where the passing game has been their strength. Leaning on QB Stetson Bennett may cause UGA issues, he has not played up to par in the last two games, throwing five interceptions.

Defensively, Georgia is going to have their hands full. Head Coach Kirby Smart says Kadarius Toney is a “first-round talent” and notes that Mullen uses him effectively in the offense. The Bulldogs will be missing FS Richard LeCounte, DT Julian Rochester and NT Jordan Davis are questionable. Last year, Florida was missing their stud DB, CJ Henderson and the Dawgs were able to expose that mismatch. Yet, the Dawgs still lead the SEC in sacks on the year with 17. This goes hand-in-hand for Georgia with Florida’s stout passing game. If they can apply pressure it will force Florida to get rid of the ball quickly.

What Florida Needs to Do to Win

Anybody in Gainesville will say they love Dan Mullen. He is a fantastic coach who truly cares about the university and his players. But there is one thing that Mullen hasn’t done as a head coach for UF and that is beat Georgia. This is his best chance.

Going back to the rushing stat from earlier, Florida still has great backs themselves. Dameon Pierce has led the Gators in rushing with 34 carries, 169 yards and a touchdown on the season. Nay’Quan Wright has stepped up as a freshman in UF’s rushing game as well. Rushing the ball may not matter with the Gators and how strong their passing game is. Florida is second in the SEC in PYGP with 342, second to Alabama. In the matchup between Bama and Georgia, Mac Jones threw for 417 yards and four touchdowns. So even though the rushing stats show the winner, Florida’s passing game could flip the script and catapult the Gators with the advantage.

Defensively, the Gators have to get Georgia off the field on 3rd down. Last year, UGA was 12-19 on 3rd down conversations to UF’s 2-9. This seemed to be a problem for Florida this season until the last game, where the defense forced Missouri into a 3-15 conversation rate on 3rd down. The Missouri game was the best the defense has played this season. To add more spice to this game, it’s a Brenton Cox revenge game against his old team.

This game could go anyway because it is a rivalry game. Georgia is favored, but the Gators have a more healthy lineup. Should be an exciting Cocktail Party in Jacksonville.