Jimmie Johnson won the 55th running of the Daytona 500 on Sunday. The five- time NASCAR champion became the 10th driver to have multiple wins in “The Great American Race.” Johnson first won the Daytona 500 in 2006.

The race was the coming out party for NASCAR’s new Gen-6 car. Johnson said he was proud to be the first driver to wave the checkered flag in the new car.

Danica Patrick also made history on the track. Patrick became the first woman to win the pole and to lead the race. She was running third on the last lap, but faded to finish eighth. Patrick said she will be replaying the race in her mind.

Dale Earnhardt, Jr. finished second on Sunday. He said was appreciative of Mark Martin’s help in the final lap, but it just wasn’t enough.

Johnson said he was playing the odds and the majority of the drivers wanted to run on the top of the track.

Johnson’s victory at Daytona comes one year after he completed only one lap in the race because of wreck and just three months after Johnson lost his bid for a sixth Sprint Cup title. 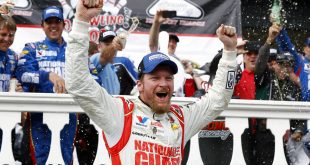 Dale Earnhardt Jr. will join his late father in the NASCAR Hall of Fame headlining …