The Florida football team began practice one week ago.

Last year, starting quarterback Jeff Driskel was splitting reps with Jacoby Brissett during the season opener. Now, Brissett is at NC State and Driskel isn’t feeling the heat of competition over his shoulder. Driskel came into spring practice with more confidence and the ability to focus with a greater ease.

The way Driskel is able to develop and improve in practice could determine the success of Florida’s offense. Last season, Driskel often held on to the ball too long. He’s currently working to make better decisions after just 11 touchdown passes and 33 sacks.

On defense, senior defensive back Jaylen Watkins is stepping up to be an example for the new guys. Watkins recorded 39 tackles last season, forced three interceptions and had eight pass breakups.

On defense as well, senior Jeremy Brown returns at cornerback. Brown’s promising career was spoiled by back and knee injuries, but he’s excited to start this season.

The Gators take the field for the Orange and Blue Debut on April 6. 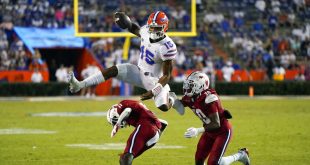