Catching up with Azania Stewart 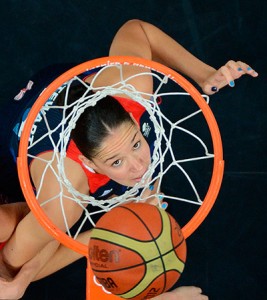 Former University of Florida basketball player Azania Stewart has been busy since she graduated and played her last game as a Gator in the 2011-12 season. The 6’4” center from Great Britain spent the summer representing her country at the 2012 London Summer Olympics. Although her team didn’t have the best showing, she was proud to play for the host nation. Stewart also said she was happy about the opportunity to see some friends from her days with the Orange and Blue.

“Off the court, seeing some former Gators in the Olympic Village like Jeff Demps and Christian Taylor; it was almost like I was back in Gainesville for a while,” said Stewart.

Stewart, affectionately called “Big Z” as a nickname during her time at UF, has been playing professionally in Europe since she left Florida. She played with a team in Great Britain and a team in Spain before settling with the Hungarian second division team PINKK-PECSI 424, helping the club attain a third place finish in the league this season. Though she’s in the ranks of professionals now, Stewart said she misses the company of other athletes at UF.

“One of my favorite things to do on a Friday night was to see the gymnastics team compete. That’s one of the things I miss the most, seeing all the other teams play and succeed. Everyone is good friends and everyone supports each other so I really miss that,” said Stewart.

Stewart has also been keeping tabs on this year’s Florida women’s basketball team as well. Stewart and former Florida teammate Ndidi Madu watched UF’s WNIT tournament run and chatted via videochat and Twitter to stay in touch, a testament to Stewart’s strong bond with her former teammates.

“They had a young team this year, but I was really happy for Jennifer George and Jaterra Bonds and the rest of the team for making the postseason and going so far,” said Stewart.

“For me, I’ve always lived out of a suitcase. I’ve never really stayed in one place for a long period of time,” said Stewart.

While Stewart continues to play in Europe, she added she wants to someday come back stateside and eventually play in the WNBA. So Gator fans may not have seen the last of “Z” just yet.