University of Florida Swimming and Diving: Eyes on the Prize

The University of Florida men’s and women’s swimming and diving seasons are underway. Last season, both teams achieved success, the men’s team winning the SEC Championship and finishing sixth at the NCAA Tournament with the women’s team  finishing sixth in the NCAA’s as well.

The Gators have high expectations for the 2013-14 season. Head coach for both teams, Greg Troy, is content with both teams thus far, as the men have started with a perfect 4-0 record while the women have gone 2-2, but he sees a lot of opportunity for improvement.

“The men have been very intense about what they have done, training has been good,” said Troy. “We haven’t swum quite the same opponents so I think we still have some challenges out there on the men’s side from that dynamic, so we don’t want to get too comfortable with where we’re at (now).”

The women’s team has struggled to find their rhythm so far in the early season. But one bright spot for team has been U.S. Olympian Elizabeth Beisel who hasn’t even swum her best event yet this year, the Individual Medley. Beisel won the silver medal at the 2012 Olympics in the 400 Individual Medley so the coaching staff knows her strong abilities within that event. The staff has wanted to see if Beisel can anchor some other events besides the IM in spring meets that the team isn’t as strong in at this time.

“Elizabeth Beisel really hasn’t swum her best event. She’s swimming all kinds of other stuff,” said Troy.  “Right now she may be the fastest or second-fastest swimmer in the country in those events and she has never swum those at the NCAA Championship.”

Currently, the men’s team is ranked second, according to the College Swimming Coaches Association of America (CSCAA), and the women’s team is ranked fifth. Coach Troy views the rankings as flattering but overall not that important at this point in the season.

“In swimming it’s very much about what the end of the year is going to be like. The rankings are nice, but they mean next to nothing,” said Troy.

The teams are looking to avoid a sense of complacency that comes with being successful. At the moment, Troy doesn’t see any complacency on his teams and expects them to continue to stay focused on the season and the goals they wish to achieve.

“I don’t see it as a problem, I think it’s something you always need to be aware of,” said Troy. “If you’re not aware of where you’re going, you can get comfortable and we’re not good enough to be comfortable. Where you are in October/November is nice, but it’s only as good as whether you’re moving towards where you want to be in the spring.”

With Coach Troy at the helm for the Gators, the expectations for both teams are achievable as long as they stay focused, keep working hard, and prepare for the end of the season when it really matters. Until then, the Gators will head to Columbus, Ohio from November 22-24 to wrap up the Fall season in the Ohio State Buckeye Invitational. 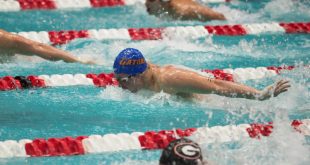