Florida Men’s Basketball makes History in their Win Over Georgia 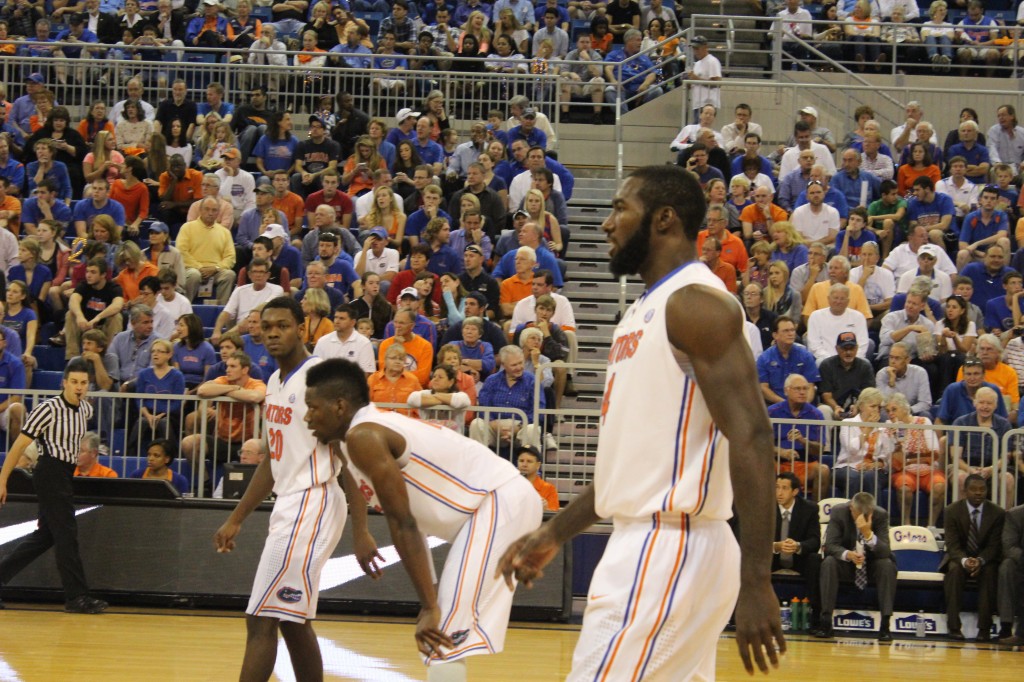 (From right to left) Gators Michael Frazier II, Will Yeguete and Patric Young all scored in double-digits during Florida’s 70-52 win over Georgia

It’s been almost seven years since Joakim Noah, Corey Brewer or Al Horford donned the Gator uniform, but until tonight, their legacy lived alive and active in the halls of the O’Connell Center.

And despite all of those key names in the previous paragraph, the key phrase was, in fact, “until tonight“.

Tonight, the Florida Gators made program history, notching their 25th consecutive win at home, a new school record that was set by the likes of Horford, Noah and Brewer, by defeating the Georgia Bulldogs 70-52.

The Gators were still without leading scorer Casey Prather, but the rest of the cast showed up in diverse ways. Even though Gator head coach Billy Donovan had preached all week about this game being “just another game”, when the crowd came alive and the momentum began to shift in Florida’s favor in the second half, there was no stopping destiny in the O’Dome.

Going into the contest, Florida knew what they were up against in Georgia; a team that could light it up from outside, and a team that was also not afraid of a challenge on the road — defeating No. 21 Missouri just six days ago.

However, after a slow first five minutes — and a tied score of 6-6 — Donovan unleashed the speed of his defense with a full court press that was too much for Georgia to handle. Gator forward Will Yeguete was, at times, the final line of defense in those press situations, but Georgia couldn’t even get to him to challenge.

“It helped us a lot, I don’t think they were expecting it,” Yeguete said. “They were turning the ball over a lot which got us going and got the crowd going. We got a lot of layups, fast breaks, dunks, and they just didn’t know what to do on the press. I think that really helped us in the first half.”

Florida guard Michael Frazier II ended the contest with a game-high 21 points, shooting over 50 percent from the floor. But, it wasn’t a perfect game from Frazier — he scored 14 of his 21 in the second half (including four 3-pointers). Following a timeout early on in the second half, Donovan got on Frazier about shooting with confidence. From there, Frazier went on to make four 3-pointers in a row. After the game, Donovan spoke on what happened in that timeout.

“Well I called timeout and went after him (Frazier) and DeVon Walker pretty hard, I thought, because I thought we passed up some shots,” Donovan said. “I can see Michael Frazier sometimes miss a couple and it’s like he’s keeping inventory… the guy is shooting 50 percent from the 3-point line. Keep letting them go!”

It seemed like a complete team effort from Florida as they had four players score in double-digits; Patric Young, Yeguete, Dorian Finney-Smith and Frazier. The Gators also finished with 18 assists on 25 made baskets (.720 percent). When asked about the advantage playing at home brings, Young said it makes a difference, whether players acknowledge it or not.

“I mean, as opposed to playing on the road, the home court advantage thing… they say it’s a myth, but it’s true,” Young said. “Especially when we’re on the other side of it. Like when we’re at Arkansas, their fans are cheering, we can’t hear out plays getting called, their on an 11-0 run… When tides are reversing, it’s a whole lot easier to have that confidence.”

As for the record, Donovan said all week that he and his team would treat this game like all the rest; just another game to go out and win. But when the win was finalized, the long-tenured Florida coach acknowledged the accomplishment.

“It was great. I’m really, really proud of our guys,” Donovan said. “The guys that won that many in a row (the ’07 National Championship team) obviously did some really special things, and I think… these guys haven’t won national championships, but they’ve done some special things as well, and I’m proud of them.”

The Gators remain undefeated in the SEC at 3-0 while Georgia drops its first conference loss and is now 2-1. Florida moves to 14-2 overall on the year and will travel to Auburn for their next game this Saturday.

Billy Donovan talks about lighting a fire in his guys’ confidence