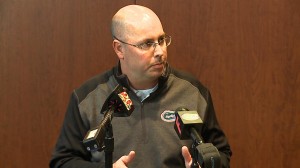 The Florida football team is in its second week of spring practice and will have its first scrimmage of the year Saturday. Florida is hard at work installing a new uptempo offense, aiming to rebound from a disappointing 4-8 season in 2013. A lot of the focus remains on the offensive side of the ball, as everyone is wondering what the unit will look like under newly implemented offensive coordinator Kurt Roper. Roper says things are moving along.

“We’re trying to fix the mistakes from the day before but we’re adding to their install  on that day so it’s hard to focus on correcting those mistakes but I think they’re doing a great job,” Roper said.  “What we’re trying to do is create an offense that’s as easy for us to learn as possible, but is still complicated to defend.”

Head coach Will Muschamp speaks highly of the job Roper is doing, praising his ability to adapt his offensive scheme to fit players and for the job he’s done midway into his first spring camp as Florida’s new offensive coordinator.

“His energy on the practice field and how he coaches the players on every down and corrects them when they’re wrong and congratulates them when they do it right is outstanding,” Muschamp said. “He plays to the player’s strengths and does a great job at it as he’s a very fundamental football coach.”

But, Muschamp isn’t the only one who has recognized the impact Roper has made on the team. Gators wide receiver Ahmad Fulwood says he sees great improvement on the offensive side of the ball, from last season’s mishaps.

“There is a certain burden there, but we respond very well to it on the field,” Fulwood said. “We’re just doing a really good job picking up what we’re learning right now and translating it from the film room to the practice field.”

The dismal 2013 Florida football season is history, and the revamping of the offense for the upcoming season is now well underway.

The Gators have three more practices that are open to the public continuing on Monday at 4:00 PM at the Sanders Practice Facility, prior to the Orange and Blue Debut on Saturday April 12th at 1:30 PM.

Here are some highlights from the second week of spring practice:

To hear audio from the above quotes, click below: