The Friday night lights will be turned on one day earlier than usual for a few local high schools. The Oak Hall Eagles will travel up to St. Augustine to play the Florida School for the Deaf on Thursday. Meanwhile, the Gainesville Hurricanes will host the Columbia Tigers.

Oak Hall is coming off a struggling 2013 campaign where the team finished a dismal 1-9. Head coach Scott McDaniel has the challenge of competing despite having a small roster. The Eagles will only have 19 players on the sidelines in their season opener.

Despite having a small squad, McDaniel is optimistic that his team has quality over quantity.

“I’ve got a great sophomore class,” said McDaniel. “Our quarterback Chase Trunnell is a big strong kid. He had about 50 yards rushing and 150 yards passing last week (in a preseason game against Ocala Christian Academy). Jackson Carey – another sophomore, he’s our strongest guy. He’s also our halfback, he had over 100 yards rushing last week as well.”

McDaniel, who enters his eighth season at the helm, will have multiple guys playing offense and defense. He hopes the team chemistry will propel the team to improvement.

“When you got large numbers in a class, (the players) tend to gravitate towards one another so this group is really, really good about that,” McDaniel added. “I think they like each other. I think as the season goes, they’re really going to want to play hard for one another. That hopefully will translate into some success for us as the season goes along.”

The Hurricanes and second-season head coach Mark Latsko will look to make it back to the state playoffs after falling in the regional semi-finals to Springstead.

The Canes will look for revenge on Thursday night. Columbia stomped on GHS with a 49-7 victory in last year’s season-opener.

Coach Latsko will only have two returning starters on offense but Caelan Christian returns as the team’s quarterback.

Meanwhile, the Tigers will look to continue the sustain the success they’ve had over the last three years. After posting a 10-2 record and a regional semi-final berth in 2013, head coach Brian Allen is focused on preparing his guys for a deep postseason run.

Columbia will once again lean on the services of senior running back Lonnie Underwood. He ran for over 1700 yards and a school record 36 touchdowns last season.

McDaniel talks about the guys on his team to look out for. 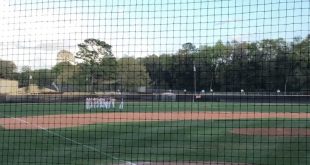