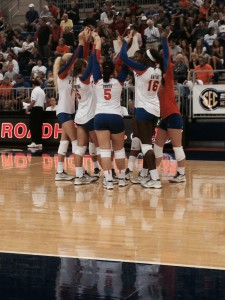 The Gators hit .442 in the match behind Antwi’s .769 clip, with 11 kills on 13 swings with just one error. The Orange and Blue held the Rebels (14-2, 0-2 SEC) to a .197 hitting percentage, .000 in the first set, as Ole Miss became the sixth opponent this season that UF has forced to operate below a .200 hitting efficiency, including both league opponents so far.

Antwi (11) and sophomore right side Alex Holston (12) both put down double-digit kills for the Orange and Blue and five other Gators joined Antwi with a .300 clip or higher, including freshman middle Rhamat Alhassan (.308), Holston (.455), junior outside hitter Gabby Mallette (.500), junior setter Mackenzie Dagostino (.800) on four dumps and freshman outside hitter Carli Snyder (.364).

Despite the success, Gators head coach Mary Wise knows that the season is still young for her squad, especially in the SEC.

“We know that the Ole Miss team that we’ll play the second time in Oxford will look very different when they have their entire personnel,” Wise said. “What we were able to do was take advantage of some match ups that may not be there the next time we play them. The play of our middles and our right side continue to lead us offensively and keeping our opponents to a low number of kills is our goal in each and every match.”

The Gators now hit the road for an away weekend at LSU and Mississippi State on Friday and Sunday.  You can catch both matches on ESPN 850 WRUF.

Pole talks about holding Ole Miss to a sub .200 clip

Pole talks about the strong serve game (6 aces; 4 from Dagostino, 1 from Alhassan, 1 from Pole)