The only SEC team undefeated in league play with a two-match cushion over Kentucky, the seventh ranked Florida volleyball team will look to add its 13th SEC victory when the Gators host a tough Alabama squad Friday night in the Stephen C. O’Connell Center.

A 17-dig performance at Tennessee from senior libero Holly Pole and a double-double on the road at Georgia for sophomore right side Alex Holston highlighted the last week of play for the Gators and solidified SEC Defensive Player of the Week honors for Pole, while Holston was an ESPN Capital One Cup Performance of the Week.

Pole knows the challenge that Alabama brings to the match.

“You know we try not to think too much about the past,” Pole said. “Whatever games in a row we’ve won. We’re just focusing on Alabama, especially since we only have one game this weekend, and making sure that we have a good game plan going into it and that we can execute it as well as possible.”

The Gators have additionally won 18 straight sets since dropping the first set to the Gamecocks in Columbia on October 15th, and of those 18 straight sets, Florida has allowed its opponent to reach 20 points in just three (twice against Arkansas in 25-20 & 25-22 second and third sets, and once at Georgia in 26-24 third).

In each of UF’s last three matches, the Gators have forced their opponent to a single-digit set.

For comments from coach Wise, Pole, and Holston, click below:

Pole on preparing for Alabama

Holston on what she is looking to improve on personally

Previous Friday Sports Update (11/7)
Next A Dream Deferred: The Story of Trish Leger 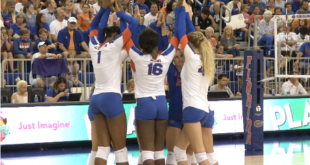 Florida Volleyball: Sweep and a Showdown