Florida Volleyball: Sweep and a Showdown

The Florida attack was led by senior All-American right side Alex Holston and All-SEC outside hitter Carli Snyder.  Holston finished with 13 kills on 20 total attacks, and Snyder notched match highs in digs (11), points (18), and kills (14).  This is Snyder’s 10th double-double of the season, a team high.  Both Holston and Snyder hit above .540 and only had two errors on the night.  Florida finished with a .464 clip, the fourth highest hitting percentage in UF’s NCAA Tournament play.

Defensively, the Gators silenced the Hornets.  Alabama State only recorded 14 total kills and a .016 hitting percentage on the match.

With a commanding victory over Alabama State, Florida looks ahead to Round 2.  The Gators will face in-state rival Florida State on Saturday night.  The Gators lead with a 39-19 overall record over the Seminoles.  Florida has already claimed a four set victory over Florida State in Tallahassee this September, so the Noles will be looking for revenge in Gainesville.

This will be the fourth time since 2010 that the Gators face the Seminoles in the NCAA Tournament for Round 2.  Florida takes the lead 3-1 in the matches through that stretch.

Catch the Gators Saturday at 7:30 in the LemDome for Round 2 of the 2016 NCAA Volleyball Tournament.

Previous NFL Preview: Miami Dolphins Looking to Continue Winning Streak
Next The Return Of The Gators? 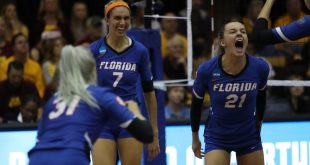 The Florida Gators Volleyball team opened their season this week on a high note. The …