Florida freshman quarterback Treon Harris only threw six passes in his first career start against Georgia. But Harris showed he’s capable of much more in his next start as he led the Gators to a 34-10 road victory over Vanderbilt Saturday to improve Florida to 4-3 in the SEC. Harris was 13 of 21 for a career-high 215 yards and ran for 49 yards and two touchdowns in the fourth quarter to put the game out of reach.

“Nothing he does shocks me, as far as, how he competes and plays,” said Gator coach Will Muschamp. “He’s a very coachable young man from the standpoint of, he gets better every single day he goes out there. He works at it, he likes working. He likes being the quarterback at the University of Florida. He likes the competitive-edge part of it. There’s nothing he does that shocks me to be honest.”

“That’s our big emphasis. We always make a goal of how many turnovers we want to get before the game. We didn’t reach our goal, but we still got the ball out and that was a big change in the game.

Vanderbilt got the scoring started in the first quarter on a seven-play, 85-yard drive that ended with freshman quarterback Johnny McCrary firing a strike to tight end Steven Scheu for a 33-yard touchdown. However, that would be the only touchdown the Commodores would score for the rest of the game. McCrary finished 14 of 35 for 160 yards with two interceptions.

Florida quickly responded with a 10-play, 65-yard drive on its next possession. The drive concluded when running back Kelvin Taylor juked his way into the end zone on a 13-yard scamper to tie it up at 7. Just like they did against Georgia, the Gators went on to score 24 straight points.

The Gators looked they were about to take the lead in the second quarter. A 48-yard pass from Harris to wide receiver Ahmad Fullwood gave the Gators first-and-goal. But after UF had the ball at the Vandy one-yard line, the ‘Dores stuffed them on four consecutive runs to force a turnover on downs.

After the Commodores took over, running back Ralph Webb, a Gainesville native, fumbled at the nine-yard line and Florida recovered. The Gators had a chance to redeem themselves and once again got the ball down to the one. On fourth-and-goal, quarterback Jeff Driskel took a direct snap and leaped over the pile, just barely crossing the goal line to score a touchdown. That put the Orange and Blue up 14-7 with 8:38 to go in the first half.

On Vanderbilt’s next drive, Webb fumbled again inside Vandy territory after he was stripped by linebacker Antonio Morrison. Florida cornerback Vernon Hargreaves III recovered it at the Vandy 43. Nine plays later, Frankie Velez kicked a 40-yard field goal to extend Florida’s lead to 17-7, which they would take into halftime.

Neither team scored in the third quarter, but the Gators ended the third quarter on a 60-yard bomb from Treon Harris to wide receiver Quiton Dunbar. That set up first-and-goal from the Vandy nine-yard line as the quarter came to a close. On the second play of the fourth quarter, Harris ran in untouched for a seven yard touchdown run to give UF a 24-7 lead.

The Commodores would cut the lead to 24-10 on their next drive after a 48-yard field goal from Tommy Openshaw but Florida quickly its lead to 31-10 after Harris marched the Gators down the field for a six play, 66-yard drive that concluded with a great quarterback designed run by Harris, who took it to the house for a 33-yard TD.

On Vandy’s ensuing posession, Vernon Hargreaves III picked off Johnny McCrary at the ‘Dores 26 to set up a 25-yard field goal by Velez to make it 34-10 with a little over eight minutes to go in the game.

The Commodores appeared on the verge of trimming Florida’s lead after a lengthy 12-play drive. However, from the UF 27, McCrary lofted it to the end zone, and freshman corner Jalen Tabor made a one-handed snag to intercept it for a touchback and seal the Gators second straight SEC win.

Florida hasn’t lost to Vanderbilt in Nashville since 1988.

“We’re on a positive slope,” center Max Garcia said. “We’re peaking right now as a team. The team chemistry is out the roof. Guys love each other, guys are playing for each other, we want to sell out for each other. I think if we just continue to do this, there’s not a team that can stop us.”

Now the Gators bring their two-game SEC winning streak back home as they host South Carolina next weekend in their final SEC game of the season. Kickoff from The Swamp is set for noon, with pregame coverage beginning at 8 a.m. on ESPN 850 WRUF.

Morrison on how the defense emphasizes forcing turnovers

Dunbar on team needing to come together

Garcia on the team chemistry 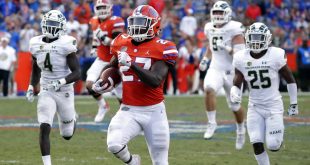