The Florida Gator swim teams will compete later this week against Georgia after most recently facing Texas and Indiana.

The Florida men’s first win of the competition was in the 100 backstroke by Jack Blyzinskyj. Caleb Dressel was a huge asset for the Gators as he finished first in the 50 free and posted a runner up finish in the 100 free. The men’s team wrapped up a second place finish in the 200 Medley Relay.

Senior Natalie Hinds picked up the first win for the women’s side in the 50 freestyle. She continued her winning streak with the second win in the 100 freestyle.

“She’s real focused and brings other people up to her level of competition. She’s pretty good about not getting down on herself and accepts the wins and the losses pretty much the same and uses them as building point moving forward. Tremendous athlete,” said Troy.

Jessica Thielmann, Ashlee Lin, and Hannah Burns all added runner up finishes. The women’s team ended with a first place finish in the 400 freestyle relay.

The Gators will return to the Stephen C. O’Connell Center in Gainesville, Florida to host the SEC rival Georgia. The meet will begin at 11:00 am on Friday. 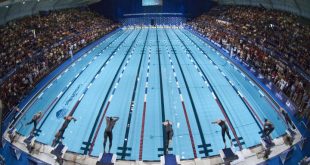