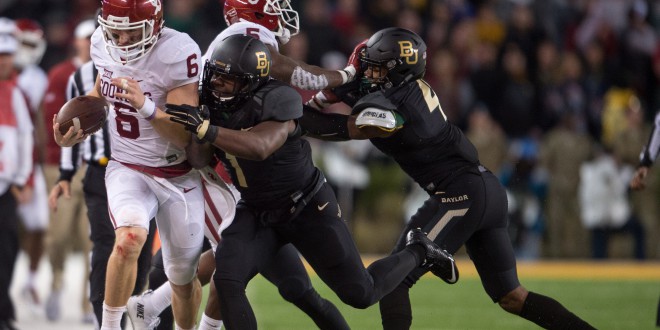 It’s Tuesday, November 17th, and you all should know what that means…

Seriously, it’s a real thing, and what a fitting holiday for the third edition of College Football Playoff Rankings being released tonight. The top five teams all won, so essentially no shakeup there; however, four out of the next five teams all fell over the weekend and will all be taking figurative hikes themselves.

Things are getting interesting, and the remaining games for teams left in championship contention are now set up to be blockbusters with major playoff implications.

What a time to be alive and a college football fan.

These are the teams out of the top five that managed to avoid the losing plague, and could see a significant jump in the playoff rankings because of that accomplishment.

Baylor, Stanford, LSU, and Utah couldn’t get the job done, and they should fall out of the top ten. The only team that might remain is Baylor at the 10th spot, because they were handed the least embarrassing loss by the surging Oklahoma Sooners.

The word is out…Oklahoma is for real, and taking down the previously undefeated Bears makes this by far the best win for the Sooners right now. That alone should not propel them into the top four, but they should rise from their current ranking at number 12.

The only knock on their playoff hopes is their early 24-17 loss to Texas.

“I thought that Oklahoma might be the dark horse, that was around the time they had the one loss against the University of Texas and everyone else was undefeated,” ESPN college football analyst Butch Davis said. “It’s starting to play out that Oklahoma may be the most complete team of the entire group.”

They haven’t done enough to make people forget quite yet, but wins in their remaining match ups with currently 15th ranked TCU and eighth ranked Oklahoma State would give them a better shot at a playoff run.

“I think Oklahoma is sitting in the drivers seat,” says ESPN analyst Danny Kanell. “Their defense is the best in the Big 12, that’s what separates them from the rest of this crew.”

Speaking of Oklahoma State, they survived a close one this weekend with the Iowa State Cyclones to remain undefeated. The 35-31 victory wasn’t pretty, but the Cowboys displayed their consistent offensive chops as well as championship-caliber ability to overcome adversity while trailing most of the game.  Marquee match ups with currently sixth ranked Baylor and Oklahoma will prove or disprove if they’re worthy of a top four playoff nod.

Florida has looked rather pedestrian since Treon Harris took over as starting quarterback for the suspended Will Grier, and it’s being reflected in where the playoff committee ranks them.

The Gators held off South Carolina last weekend, but their offense continued to be out of sync (10th in the SEC in yards gained), and the defensive side of the ball has had to play lights out the past couple weeks to keep them afloat; however, the defense also struggled late against the Gamecocks.

“We understand how hard winning is, and figuring out how to win,” said Florida coach Jim McElwain.

The Gators have a good chance to win out with a relatively easy matchup against FAU up next. After that is their final test against Florida State.

Florida can make a case for the playoffs as a one-loss SEC champion, but it’s looking like a daunting test against the Alabama Crimson tide will soon await them in Atlanta for the SEC championship.  All that said, Florida should move up from its current number 11 ranking.

Michigan State’s one loss to Nebraska (39-38) had them on the outside looking in the last edition of the CFB Playoff rankings, but the multitude of losses in the top ten last weekend could bring them back into contention.  They too should move up.  This Saturday’s biggest game will arguably be the Spartan’s Big Ten Royal Rumble against currently third ranked Ohio State. If Michigan State can upset Ohio State and take care of Penn State next week, could they make the top four?

Self-explanatory. They didn’t lose, so they probably won’t move, unless the committee saw something this weekend to switch their order or take someone out.

If that was to happen, it would probably be to move down either Notre Dame or Iowa to replace them with Oklahoma State.

The third edition of this season’s College Football Playoff rankings will be released tonight on ESPN.

And remember, please keep your hands and feet inside this roller coaster at all times. It’s going to get a little crazy.

ESPN’s Ivan Maisel on value of TCU win for Oklahoma

Florida Head Coach Jim McElwain on the Gators so far