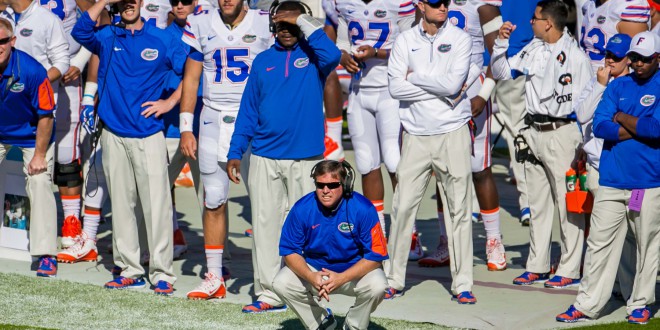 The Florida Gators have already clinched a spot in the SEC title game on December 5th, and the match-up the team has next week with bitter in-state rival Florida State is setting up to be one with national ramifications. This Saturday, however, the Gators have a date with another in-state opponent in the FAU Owls.

The Gators (9-1) are heavy favorites at home against the Owls (2-8), but corner back Jalen Tabor knows that his side can’t afford to look past FAU. Any College Football Playoff hopes the team has would likely be blown away with an upset loss this Saturday.

For Gators Head Coach Jim McElwain, it’s a good thing if his players are feeling confident going into this Saturday’s game. He feels his team’s preparation is what is most important, and that’s the mindset he wants players to have.

Meanwhile, the FAU Owls are going into The Swamp with hopes of achieving what would be one of the biggest regular season victories in program history.  FAU Head Coach Charlie Partridge believes that playing the game at Ben Hill Griffin Stadium will be huge challenge for the Owls, and the team has been practicing with added noise in practice in order to be better prepared for the tough conditions they’ll face.

Partridge also feels that his team has played a lot better than their 2 and 8 record shows. The chip on the shoulder that the players feel, Partridge hopes, will carry the team in an in-state match-up where many players on both sides grew up playing against each other.

On the field, the Gators will look for their defense to keep up the stellar play they’ve had as of late.  McElwain calls trick plays the “Achilles heel” to the 5th ranked Gator defense so far this year, and FAU’s ability to run trick plays successfully will be something to keep an eye on this Saturday.

Senior Jacquez Johnson figures to be the starter for the Owls at quarterback, and his ability to run the ball (227 rushing yards this season) could also potentially be an issue for the Gators.  The Gators struggled mightily against dual-threat quarterback for Tennessee Joshua Dobbs earlier this season.

Gator running back Kelvin Taylor figures to the focal point of the offense, after his 105 yard performance in last week’s win against South Carolina. The Gators will hope Taylor and the rest of the running game can help quarterback Treon Harris minimize his mistakes, after throwing two interceptions last game.

This will be the third time ever that the Gators and the Owls play, with the Gators having won the previous two match-ups .

The game is scheduled to kick off at noon on Saturday from Ben Hill Griffin Stadium.