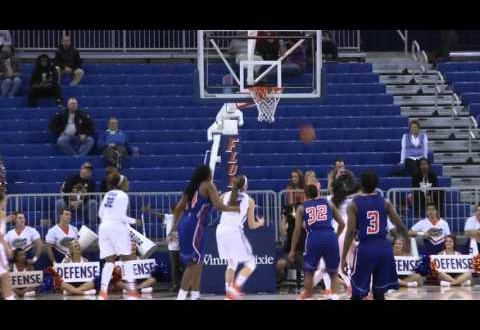 The Florida women’s basketball team avenged a loss to Savannah State last year with a big 99-34 home win Tuesday in the O’Connell Center.  The big win was the largest margin victory in the coach Amanda Butler Era.

With numerous of Gators scoring in the first minutes, UF had a 28-13 lead at the end of the first quarter. Big offensive plays came early from junior guard Ronni Williams, freshman Eleanna Christinaki and Dyandria Anderson. Williams collected her third consecutive double-double with a total of 16 points and 10 rebounds. Christinaki ended her night soaring past the defense with no-look passes that added up to six assists and 11 points, but the Gators really made a defensive statement in the second quarter.

From the start of the second quarter, the crowd got a taste of what the Gators are about on defense. Simone Westbrook lead the team is steals after snagging the ball on defense a total of six different times. And it didn’t stop there, the whole team unified on defense and held Savannah State to zero points at the end of the second quarter. A 22-0 run by Florida started to turn heads and contributed to the high scoring game. The Gators roster tallied up a total of 22 steals at the end of regulation as well.

The electrifying defense allowed the offense to capitalize on the other end of the court almost every time they paid a visit to the basket. Every Gator who saw the court tonight scored in a big way. Senior guard January Miller chomped in a high-scoring night with a total of 16 points and junior guard Carlie Needles once again found her hot spot behind the perimeter with a total of two 3-pointers. These shots made from downtown by Needles, places her in the fifth spot in 3-pointers made in program history passing Gator great Steffi Sorensen.

Head coach Amanda Butler expressed her excitement for and pride in the team, but is determined to get the Gators’ free-throw percentage higher in the upcoming games.

The Gators are now focused on the next opponent, Ball State on Friday night in the Omni Hotels Classic, hosted by University of Colorado. Coverage of the game can be heard on ESPN Gainesville/95.3 FM. Tip-off is set for 7 PM.

A senior at the University of Florida reporting on Gator sports, local Gainesville and surrounding area sports, and telling the stories of local athletes. Born and raised in Gainesville, Florida with a passion for telling people's stories and having fun doing it.
@SportsDarwinism
Previous College Football Playoff Poll Update For Week 13 To Be Released Tonight
Next Florida Men’s Basketball Welcomes Vermont