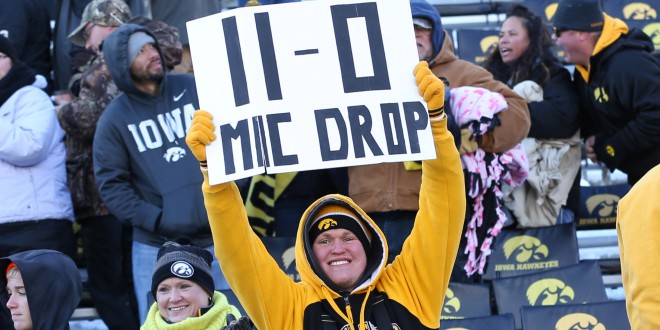 The fourth edition of the College Football Playoff poll tonight will finally have a new member in the Top Four, with Ohio State losing to Michigan State over the weekend.

Only two unbeaten teams remain, which makes setting the order of the Top Ten a harder decision for the selection committee, who now have to decide between nine one-loss teams.

“I think one and two will remain the same, Clemson and Alabama,” said ESPN College Football Analyst Brad Edwards. “After that, I tell you what it could go a number of ways.”

Iowa is still unbeaten and joins Clemson as the only two teams without a loss on the season. They’re expected to finally crack the Top Four after slowly ascending in the rankings for weeks.

Oklahoma is still riding high as a hot team of late, and their win against previously ranked No. 18 TCU should push them up from the seventh spot in last weeks rankings to right outside the Top Four. They can win the Big 12 with a road victory over No. 9 Oklahoma State this weekend.

That would make it three in a row over ranked teams in their conference for the Sooners.

The biggest surprise on the season is North Carolina. They’re Cinderella season continues to look less like a fairy-tale and more like a serious dark-horse ready to ride in and shake things up if given the chance; however, there is no avoiding their week 15 matchup with No. 1 Clemson.

Florida fans will argue that if a one-loss Gators team can beat Florida State and Alabama in consecutive weeks, becoming SEC champions in the process, then they would deserve a spot in the playoffs.

But Florida has not passed the eye test for three straight weeks, with unconvincing wins over Vanderbilt, South Carolina, and Florida Atlantic.

Ohio State and Oklahoma, both previously undefeated, lost over the weekend.

That obviously will affect their ranking and their chances of making the playoff. Ohio State will certainly drop out of this weeks Top Four.

This College Football season just keeps getting better, and that makes it even harder to predict.