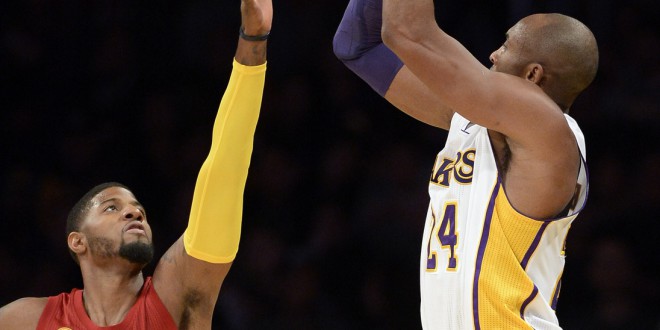 It is almost impossible to compare another player to the likes of Michael Jordan.  But when we are asked who could even come close, for most it is Kobe Bryant.  Whether it was his 81-point game in 2006 against the Toronto Raptors or his uncanny ability to win games with only seconds left, Bryant became an NBA giant.

During his high school career, Bryant was a powerhouse and caught the eye of many.  In his junior year, he averaged 31.1 points, 10.4 rebounds and 5.2 assists and was named “Pennsylvania Player of the Year.”  College recruiters were lined up at his door, but Bryant had his eyes on the NBA after seeing Kevin Garnett going first in the 1995 Draft.  While still in high school, he was invited by 76ers coach John Lucas to scrimmage with the team.  By Bryant’s senior year, he averaged 30.8 points, 12 rebounds, 6.5 assists, 4.0 steals, and 3.8 blocked shots.  His No. 33 jersey is retired at the Lower Merion High School gym.

The rest is history as Bryant was drafted 13th in the first round of the 1996 NBA Draft by the Charlotte Hornets and then traded to the team he would remain on until this day; the Los Angeles Lakers.  Bryant says hands down being drafted was the greatest moment in his career.  His statistics are proof enough of his amazing ball-playing abilities.  In his 2005-2006, Bryant had a career-high of 2,832 points.  Former Laker Magic Johnson says Bryant has meant the world to the NBA and the Laker organization.  In his younger years, Bryant loved the Lakers and he says being in the same discussion as Magic Johnson is a dream come true.  After the Michael Jordan era many people didn’t know who would step up.  Johnson says Bryant became the new era of the NBA after Jordan retired.  Bryant even made a poem to reflect how he felt about his career and leaving behind all the memories he created with his success.

Bryant announced his retirement December 29th to the public and explained how tough the decision was.  He says being vocal about his decision to walk away from his passion is much harder than it just being a simple thought.  New York Knicks President Phil Jackson was able to give advice to Kobe on his final days on the hardwood.  He says to break up the season and take it one “chunk” at a time.  Despite the melancholy atmosphere over Bryant leaving the NBA, he says he is at peace with his decision and knows it is time to leave the court behind.  Kobe Bryant of course won’t be leaving his team high and dry and instead will be finishing out the season to the best of his abilities.  He says he appreciates the tough times as much as he appreciates his triumphs that he has had throughout his career and he will remember these final moments in the NBA.  Overall, Bryant has received positive responses from other basketball players who have looked up to him.  When players tell Bryant how much they have admired him and learned from him, he believes those responses mean the most.  Kobe Bryant’s career as a Los Angeles Laker and NBA player will come to an end as the 2015-2016 subsides.