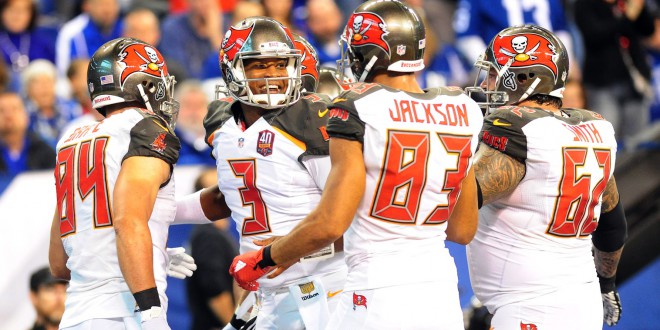 The Tampa Bay Buccaneers, positioned just one game back in the NFC wild card picture, welcome the sputtering Falcons into town for Week 13 action.  These two division rivals faced off back on November 1, with the Bucs escaping the Georgia Dome with a 23-20 victory in overtime. Atlanta committed four turnovers in that game and resulted in 20 Tampa Bay points. Lovie Smith’s crew knows they might have to have another defensive performance like that to sweep the season series against a Falcons team that is expected to come out with a heightened sense of urgency.

“This is the time that football matters,” rookie quarterback Jameis Winston said. “These next five games are really big.”

After hosting Atlanta (6-5, four straight losses) on Sunday, the Bucs (5-6) match up with the Saints (4-7), Rams (4-7), Bears (5-6) before finishing the season against the currently undefeated Panthers.

Jameis Winston seems to have found his rhythm of late, tossing seven touchdowns and just three interceptions in the past five games. Tampa Bay has also seen a revitalization of running back Doug Martin, who has rushed for 332 yards in his past two games after gaining only 165 in the prior three contests combined. Head coach Lovie Smith will certainly look to get “Muscle Hamster” rolling again, and maybe even get him a touchdown or two. Martin hasn’t reached the endzone since October 11.

On the other side, Matt Ryan has been anything but “Matty Ice” in the Falcons’ four consecutive defeats. He’s thrown six interceptions in the span, not including another two he had in a win over the Titans on October 25. Ryan could also use some help from running back Devonta Freeman, who hasn’t scored a TD after notching a whopping nine in the team’s first six. Freeman is listed as probable for Sunday after missing last week with a concussion.

Kickoff from Raymond James Stadium is set for 1PM.

Moving to the AFC, the Jaguars will look to bounce back against their South division rival after letting a possible third straight win slip away last Sunday against the Chargers. Jacksonville visits the 2-9 Titans, a team they defeated just three weeks ago in Bold City. Blake Bortles will be without his second-favorite target, Allen Hurns, in Nashville. Hurns sustained a concussion last week and didn’t clear NFL protocol on Wednesday. Head coach Gus Bradley knows that will only add to the difficulty of playing the visitor role, as they are just 1-4 away from EverBank Field.

“We’ve got to prepare well and play well on the road,” Bradley said. “That’s the challenge, and it always is in the NFL.”

Despite their 4-7 record, Jacksonville is still in the hunt in the AFC South. The Colts and Texans, each 6-5, are both on the road this week — Indianapolis visits Pittsburgh and Houston travels to Buffalo. A Jags victory and a loss from both Indy and H-Town puts Jacksonville a mere one game back in the division.

Kickoff from Nissan Stadium will be at 1PM, and you can tune into coverage on ESPN Gainesville 95.3 FM beginning at noon.

Finally, the last place Dolphins, fresh off firing offensive coordinator Bill Lazor earlier in the week, play host to the Ravens. On paper, this is not an appetizing matchup for Miami or their fans. The Fins have dropped four of their past five games, and have lost five straight contests against Baltimore. Matt Schaub (5-0 in his career against Miami) gets a second straight start in place of the injured Joe Flacco. Quarterbacks coach Zac Taylor now takes over the playcalling duties for a floundering Dolphins offense. The teal and orange scored a combined 82 points in back-to-back wins over the Titans and Texans back in October, but have scored just 78 total in the five games since then — a mediocre 15.6 average. Despite those numbers, there is optimism.

“I’m excited about some of the new things we’ll be doing on offense,” quarterback Ryan Tannehill said. “We have the playmakers.”

Don’t expect an overnight turnaround, however. The Ravens defense has clamped down lately, surrendering less than 270 ypg in their last three. Baltimore is also coming off a wild Monday Night Football victory in which they blocked the game-winning field goal attempt by the Browns, with former Gator Will Hill recovering the ball and returning it for a walk-off touchdown. Kickoff from SunLife Stadium is at 1PM.