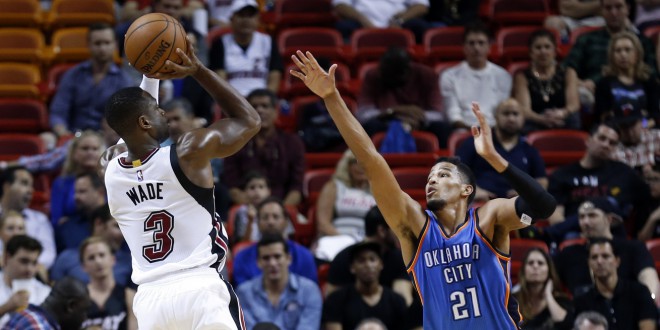 It took all four quarters for the Heat to put away the Thunder in Miami. Thunder PG Russell Westbrook and SF Kevin Durant finished with 25 points each in head coach Billy Donovan’s first game in the state of Florida since October 30th. Neither team was able to separate themselves as there were 38 lead changes, an NBA season high. Durant drained a late three from deep to give the Thunder a 95-93 lead with 1:32 left in regulation. But with a little over :30 left, Heat SG Dwayne Wade called his own number and split the defense on a drive to the rim for a hard earned two points. 95 all. Wade finished with a game high 28 points. The Heat would get the ball back, and yet again, Wade would iso, only this time he was fouled. He drained both free throws with 1.5 seconds left on the clock. Westbrook would heave a desperation three as the clock expired, but it was to no avail. Heat win 97-93. Up next for the Heat is a primetime matchup the Cleveland Cavaliers on Saturday, December 5th.