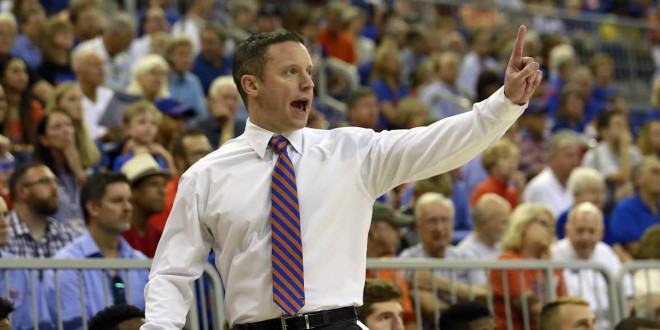 Preview: Florida Men’s Basketball Prepares for The U

The Florida men’s basketball will travel to Coral Gables for just the second time in 25 years tonight to take on the University of Miami at 7 p.m. The last time the two teams met was last season, when Angel Rodriguez’s last second shot gave the Hurricanes a 69-67 victory over the Gators on their home-court, the first loss at the O’Dome for the Gators in 973 days.

When the Gators played Miami last season, the narrative was flipped. Florida came into that game as the ranked team, #8 at the time, and was facing a younger, less experienced Miami basketball team. This time, while not ranked as highly, the #21 Miami Hurricanes will look to defend their home-court against a younger, unranked University of Florida basketball team looking for its sixth win of the season, and fourth in a row.

Not only will the Gators be traveling to UM for the first time since 2005, but they’ll also be taking on their second ranked opponent of the season. The first time the Gators faced a ranked team, they fell to #11 Purdue, 85-70. That loss has been Florida’s only one of the season, but the road ahead will only get tougher for the Gators. Florida’s next game following Miami will be against number one ranked Michigan State in East Lansing. So, not only will the Miami game hold great importance as an in-state rivalry game and road test for the Gators, but also as their last live game action to prepare with before they face off against MSU.

While the Gators outrebounded their last opponent Richmond, 57-36, the numbers tonight will more than likely be a bit more even. Florida center John Egbunu, standing at 6’11” will be pitted against Miami’s center Tonye Jekiri, standing at a modest seven feet tall. Jekiri is averaging 9.3 points a game to go along with 10.3 rebounds and 1.4 blocks, while Egbunu averages 12.7 points, 8.3 rebounds and an identical 1.4 blocks per game.

Miami’s main scoring threat this season has been redshirt senior Sheldon McClellan, a guard transfer from Texas, who played his first game with the Hurricanes last year after sitting out the 2013-2014 season due to NCAA transfer rules. McClellan is averaging a team high 15.9 points per game and playing in a team leading 30.8 minutes per game. Facilitating the offense will be a familiar, but less than friendly foe. Miami point guard Angel Rodriguez comes into the game averaging a team high 4.3 assists per game to go along with scoring 12.4 points a contest, which is good enough for second on the team. Florida coach Mike White discussed Miami’s potent offense and how the Gators can limit Rodriguez’s offensive takeover.

The Gators will look for another great overall game from their leading scorer, forward Dorian Finney-Smith. In his last game against Richmond, Finney-Smith put up nine points, 13 rebounds and seven assists, just a little shy of a triple-double. Finney-Smith is averaging 14.3 points and nine rebounds a game. Florida could also benefit from another strong showing from forward Devin Robinson. The player affectionately known to Gator fans as “DRob” put up 12 points and 13 rebounds in his last outing against Richmond, and is averaging 11.1 points a game, good enough for third on the team, as well as eight boards a game. Coach White shared his thoughts on the team’s rebounding thus far and Robinson’s strong play.

Previous Kirby Smart Returns Home to Georgia, This Time as a Head Coach
Next MNF: Dallas slides past Washington