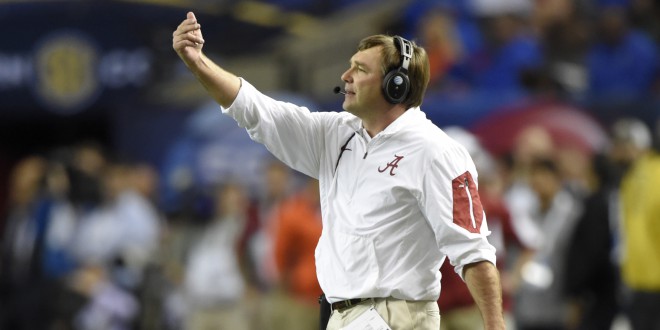 Kirby Smart Returns Home to Georgia, This Time as a Head Coach

Kirby Smart has officially been introduced as the new head football coach of the Georgia Bulldogs making him the 26th head coach in program history.

Smart takes over for Mark Richt who spent 15 seasons in Athens and won 145 games during his tenure.

This is a homecoming for Smart who played at Georgia from 1995 to 1998 and is currently tied for fourth all time in school history with 13 career interceptions. He’s also already had two stops at Georgia on his climb up the coaching ladder having spent the 1999 season as an administrative assistant before returning to Athens for one year in 2005 to coach running backs.

Since 2008, Smart has served as the defensive coordinator on Nick Saban’s staff at Alabama. During those eight years, the Crimson Tide defense has ranked outside of the top 10 in total defense just once (2014). While in Tuscaloosa, Smart’s name would often come up for open head coaching positions, but he wanted to wait for the right opportunity and he believes he has that at Georgia.

Smart will begin recruiting for the Bulldogs immediately as he, reportedly, had an in-home meeting with five-star quarterback Jacob Eason last night. But, once the dead period begins on December 14th it will be back to Tuscaloosa as he will stay on as defensive coordinator for the Crimson Tide in the college football playoff. He made the decision to stay for the championship run based on the relationships he has with the players.

With this hire, and the recent announcement of Will Muschamp at South Carolina, there are now three former Saban assistants who hold heading coaching jobs in the SEC including Florida’s Jim McElwain.

Smart and Alabama will take on Michigan State in the Cotton Bowl playoff semifinal game on New Years Eve. As for Georgia, they have a match up against Penn State coming on January 2nd in the Taxslayer Bowl at Everbank Field in Jacksonville; the Bulldogs have not decided who will be the interim head coach for that game.

22 years old from Pensacola, FL. Telecommunications major at the University of Florida with a focus on Sports News, also pursuing a minor in Communication Studies.
@yancey_dewayne
Previous Heat Fall To Wizards
Next Preview: Florida Men’s Basketball Prepares for The U