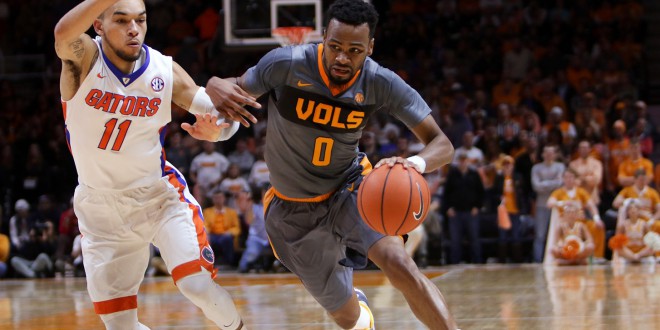 On Wednesday night, the Florida men’s basketball team (9-5) looked to carry the same momentum it had after being Georgia at home in its SEC opener but it was not to be as Tennessee (8-6) knocked off the Gators 83-69 in Knoxville.

The Gators did not shoot well (34.3% from the floor) and lost the rebounding battle to the Volunteers, 49-40 as well. Florida coach Mike White called the game Florida’s worst game defensively and on the boards this season. The Gators are now 17-45 all-time in Knoxville, and have dropped to 1-1 in conference play. Tennessee guards Kevin Punter and Admiral Schofield combined for 43 of their 73 points, leading the offense in transition and the half court game. Punter was the true standout for Tennessee finishing with 26 points on nine of 16 shooting, including three of three from downtown. Leading the Florida offense was KeVaughn Allen with 18 points and five rebounds. Dorian Finney-Smith had a double-double, his second of the season, finishing with 12 points and 11 rebounds. Florida forward Alex Murphy played in only his third game of the season, putting up three points.

In the period before the first TV timeout at 15:48, both teams came out ferocious and shooting the ball well. Florida started off five of 10, good for 11 points, while Tennessee went six of 10 for 13 points. Even the three point game, where Florida is last in the SEC, was going strong, with Florida hitting three of their first five shots from beyond the arc. Unfortunately for the Gators, Punter started off the night seven of seven from the field, and three of three from beyond the arc, giving Tennessee a six-point lead after the first 10 minutes. Just like last game, when Punter and Schofield combined for 53 of the team’s 77 points in a six point defeat to Auburn, the two combined for 21 of the Vol’s first 26 points in this one.

To end the half, the Gators looked lethargic and out of place, only hitting four field goals in the last 13 minutes of play, giving Tennessee a 53-31 lead. After starting three of five from deep, Florida hit just two of its next nine 3’s to end the half. On the other hand, the Volunteers were able to force eight turnovers in the first half, scoring 12 points off of their strong defense. Along with their efficiency on the defensive side of the floor, the Volunteers outrebounded the Gators 23-20 in the first 20 minutes. Punter led Tennessee in the first half, scoring 18 points while Schofield put up 15 points on seven of 11 shooting. Leading Florida in scoring in the first half was Dorian Finney-Smith with eight points, going three of seven from the field, and adding eight rebounds.

The Gator woes would continue in the second half, starting off the final 20 minutes one of six from the floor.  As Tennessee’s lead continued to grow, going up 60-33, Mike White at one point scrapped his entire lineup on the floor, putting in Kasey Hill, Alex Murphy, Lexx Edwards, Devin Robinson and DeVon Walker, a five man rotation the Gators hadn’t previously used this season. To continue the same narrative all night, the personnel change did not help Florida as the deficit still continued to grow. While the Gators would cut the Volunteers lead to 14 with 2:03 remaining, and finish the game on a 24-11 run, the effort, and Florida’s 13 of 36 shooting in the second half would not be enough, as UF would lose its fifth game of the season, 83-69. Florida coach Mike White talked after the game saying that going into the contest, the Gators had a very sub-par shoot around and summarized what the team did incorrectly offensively.

Florida continues its SEC schedule on Saturday at 1:30 P.M. in Gainesville, where they’ll take on Ben Simmons, a potential top three pick in the upcoming NBA Draft, and the LSU Tigers (9-5), who will be coming off of a strong win against the Kentucky Wildcats. White said that his team has to find five guys ready to fight at the tip against the Tigers and that their practice on Thursday will be extremely tough with a good amount of conditioning.