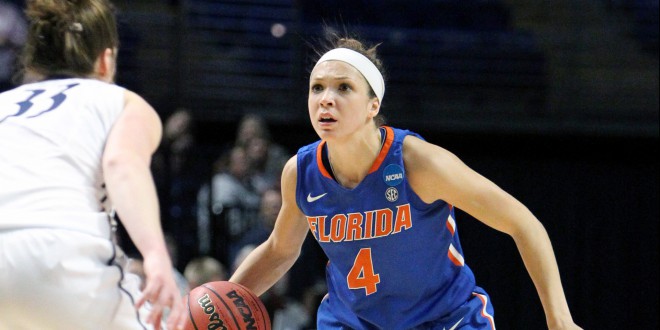 Mar 25, 2014; University Park, PA, USA; Florida Gators guard Carlie Needles dribbles the ball up court against the Penn State Lady Lions in the first half of a women's college basketball game in the second round of the NCAA Tournament at Bryce Jordan Center. Matthew O'Haren-USA TODAY Sports.

Tonight, the Florida women’s basketball team hits the road to take on nationally ranked Tennessee. Tip-off between the Gators and Volunteers is set for 7:30 p.m. and you can hear the game live on ESPN Gainesville/95.3 FM at 7:15 pm.

Florida comes off a home loss on Sunday to Mississippi State that opened SEC play for the Gators.  It was Florida’s first loss since November 13th. With passing miscues, inaccurate shooting, and early foul trouble, the Gators’ late run to upset the Bulldogs was shut down.

Florida had 20 turnovers at halftime against Mississippi State and they probably can’t afford that same number against a Rocky-Topping Tennessee.

Tennessee opened SEC play with an impressive win over an unbeaten Missouri team. Four different players scored in double figures against the Tigers, led by Jamie Nared. Nared had a season high 13 points and it was her third consecutive game scoring double figures, after missing the first nine contests because of an injury.

The Volunteers hold a 48-3 all time record against Florida, and has won 11 in a row against the Gators.  Tennessee is sitting at the 12th spot in the AP poll and Florida is currently 1-1 against ranked teams this season.

Nationally, the Gators are ranked third in steals and fifth in forcing opponents to turnover. Offensively, Florida’s Ronni Williams is the team’s leading scorer and has tallied up five double-doubles this season. Eleanna Christinaki has averaged a team-best 13 points per game with her scoring in double figures in five of the last seven games for the Gators.

Florida’s head coach, Amanda Butler, believes that the loss to Mississippi State could play the role as a learning lesson and help the team bounce back.

The last time Florida got a victory over Tennessee in Knoxville was on February 26, 2006; this Gator team is hoping to make its own history tonight.

A senior at the University of Florida reporting on Gator sports, local Gainesville and surrounding area sports, and telling the stories of local athletes. Born and raised in Gainesville, Florida with a passion for telling people's stories and having fun doing it.
@SportsDarwinism
Previous Florida Men’s Basketball Drops SEC Road Opener to Tennessee, 83-69
Next Magic Start Slow, Fall to Pacers