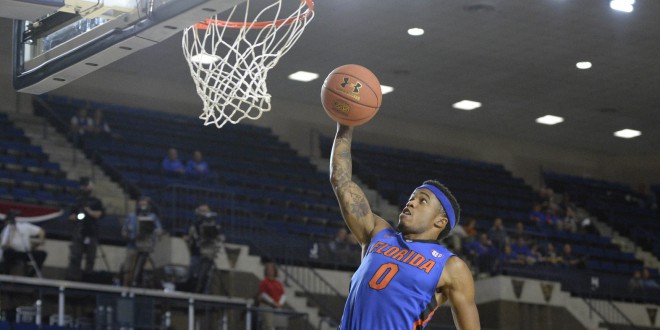 In what might have been the Florida Gators’ (10-6) most complete game of the season, their effort wouldn’t be enough, as Texas A&M (14-2) would defeat the Gators on Tuesday night at Reed Arena, 71-68. The win marks the first time the Aggies have started out 4-0 in conference play since the 2006-2007 season, when they were still in the Big 12. That year, Texas A&M would make it all the way to the Sweet 16 before losing to Memphis. As you might remember, the Gators would finish that season even better than the Aggies, winning their first ever national championship.

Despite losing the game, the Gators would finish the contest on a 19-11 run, and even give themselves a shot to tie it as time expired. Chris Chiozza, following a poor inbounds pass from the Aggies with nine seconds left would come up with the ball and get off a clean three-point shot. Unfortunately for Chiozza and the Gators, the shot would fall short, and Texas A&M would come up with the rebound as time expired. Florida Head Coach Mike White talked after the game, discussing how the Gators came into the game prepared, played well, but just couldn’t get the win.

Texas A&M guard Jalen Jones would lead all scorers with 26 points on 8-13 shooting, including 3-4 from downtown. Jones also added six rebounds to his box score. Dorian Finney-Smith led the Gators’ offense, finishing with 17 points and 12 rebounds, notching his third double-double of the season. Other Gators in double digit scoring included Chris Chiozza with 12 points, going 2-6 from downtown, and Justin Leon with 16 points on 7-8 shooting. Danuel House played solid for the Aggies as well, finishing with 22 points and five rebounds.

After trailing for most of the early first half, the Gators would go on a 9-0 run, starting at the 11:18 mark to give themselves a 17-15 lead. Facing a smaller Texas A&M team, Coach Mike White and the Florida Gators knew that they’d need to work it inside if they wanted to find success. In the first twenty minutes, Florida scored 14 of their 28 points in the paint.

The Aggies entered the double bonus with 4:21 left to go in the first half, but in a fashion similar to the Gators, and opposite of their own, they would only hit 6 of their 11 first half free throws, good for 55%. Headed into the locker room, the Aggies found themselves up 33-28 on the Gators.

Texas A&M had two players in double digit scoring going into halftime, led by Jalen Jones with 12 points on 4-7 shooting. Jones’ lone first half three-pointer would be the last shot of the first twenty minutes, and would give the Aggies their five-point lead going into the half. Danuel House, the Aggies’ second leading scorer in the first half with 11 points on a below average 4-13 shooting, headlined Texas A&M’s battle on the boards with five rebounds in the first half.

The Aggies won the first half rebounding battle, grabbing 21 boards to the Gators’ 19. Florida’s first half advantage would be their support from the reserves. The Gators outscored the Aggies’ in first half bench points, 10-3. Texas A&M’s first half key was their ability to score off the turnover. Florida turned the ball over eight times in the first twenty minutes, leading to 11 points for the Aggies. The first half featured four different lead changes and only 14 total assists from the two teams.

Neither team shot well in the first half with the Gators shooting 39% from the floor, and the Aggies 38%. Florida went 4-15 from beyond the arc in the first twenty minutes, while Texas A&M went a slightly better 3-10.

Florida opened up the second half on a 12-7 run, knocking down five of their first six shots, including 2-2 from downtown, tying it up at 40 with 16:28 left to go in the contest. After the Aggies retained their lead, the Gators would once again tie it up at 47 after a Chris Chiozza three-pointer off the in-bounds pass with 13:55 left in the game.

The Aggies would hit their stride on a 9-0 run after the Gators tied it up at 47, taking a 56-47 lead. When it looked like the Gators were down and out, they still wouldn’t give up. Clutch three-pointers from Justin Leon and Dorian Finney-Smith would pull Florida within four points of Texas A&M with 3:24 left in the game.

Dorian Finney-Smith would hit a clutch three pointer for the Gators with 25 seconds left in the contest, diminishing the Aggies lead to only one. Finney-Smith’s shot would be the fifth point of the Gators’ 5-0 run in the last two minutes to bring it within one.

After Finney-Smith knocked down a must hit shot for the Gators, Alex Caruso would be fouled and go 2-2 from the charity stripe putting the Aggies back up by three with 22 seconds left. After the free throws, Chris Chiozza would push the ball down the floor, knock down a floater, and once again bring it within one point. A pair of free throws by Collins with nine seconds left would fall after the Gators fouled following Chris Chiozza’s shot.

While Florida would get the ball back with nine seconds left following the free throws, John Egbunu would be called for a moving screen on what seemed to be the Gators’ last possession of the game. Unfortunately for Texas A&M, the Aggies wouldn’t see Dorian Finney-Smith on the inbound wedge his way in between Danuel House and the ball. Chris Chiozza would wind up with the ball and fire up a three pointer for the Gators with one second left that would fall short, and give Texas A&M the 71-68 victory over Florida.

While Florida would outrebound Texas A&M, 41-39, the Gators’ downfall would be their 16 turnovers, leading to 21 points for the Aggies. Coach Mike White talked after the game about how turnovers killed Florida overall. despite shooting better than Texas A&M from field goal range (44%-36%) and three-point range (38%-30%), the Gators’ most common enemy this season, the free throw line, would also be a large part of their loss to the Aggies. Florida shot 4-12 (33%) from the free throw line, while Texas A&M would capitalize better on their opportunities, shooting 20-30 (67%) from the charity stripe. Despite ranking eighth in the nation in assists, Texas A&M would lose the dime battle, 18-14, to Florida. The Gators, as expected, outfought the Aggies in the interior, outscoring Texas A&M, 30-26 off points in the paint. Coach Mike White also discussed what the Gators’ did wrong defensively.

Florida will have three days of rest before capping their two-game road trip in Oxford, where they’ll take on the Ole Miss Rebels (12-3). The Gators have played the Rebels 102 times in program history, with Florida leading the all-time series, 59-43.

Previous West Virginia Wins Their Eighth in a Row; Upsets No.1 Kansas 74-63
Next College Basketball Preview: Ole Miss at LSU for SEC Match-Up