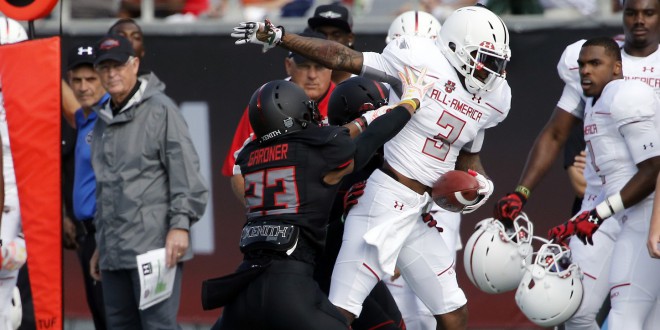 About two and a half weeks remain before 2016 National Signing Day, and that means crunch time on the recruiting trail for Gator football coach Jim McElwain and his staff. Eight prospects are expected to be in Gainesville this weekend, including three who have already committed to the Gators. The recruiting “dead period” ended Wednesday at midnight, opening up the floodgates for official visits and face-to-face contact between recruits and coaches.

“These next couple weeks are really the crazy time of the year,” Rivals recruiting analyst Blake Alderman said.

Offensive lineman Brett Heggie (Mt. Dora, FL) and Jawaan Taylor (Cocoa, FL) along with defensive end Jachai Polite (Daytona Beach) are the three verbal commits who will be on campus this weekend. Heggie and Taylor will likely look to make good impressions on another duo of offensive linemen in town from the Carolinas in Landon Dickerson (Hudson, NC) and John Simpson (North Charleston, SC).

Other recruits visiting The Swamp include linebacker Dontavious Jackson and cornerback Chris Brown, best friends and teammates at Elsik High School in Houston, along with current Georgia linebacker commit Jaleel Laguins (Watkinsville, GA). The status of offensive lineman Marcus Tatum’s visit is up in the air after he committed to Tennessee earlier in the week.

“Whenever I see a kid commit somewhere, I know they’re still going to take visits,” Alderman said. “A commitment now is basically ‘this is my current leader…anyone else who wants to recruit me, come and get me.'”

“That was their big thing from the start, they wanted to get these guys on campus now,” Alderman said.

The Gators currently have a total of 26 commitments (early enrollees included) and the seventh ranked class according to ESPN Recruiting Nation. National Signing Day is on Wednesday, February third.