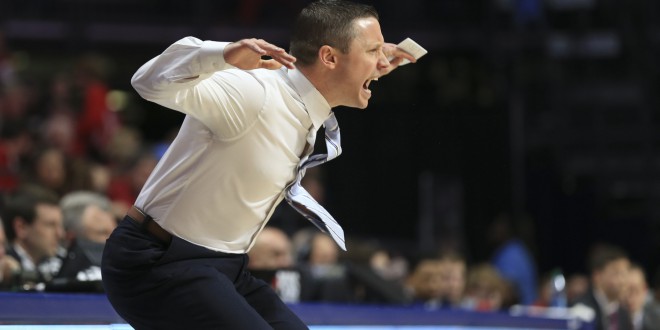 On Saturday night, the Florida men’s basketball team and coach Mike White both earned something special.

The Gators (11-6, 3-2) defeated Ole Miss (12-5, 2-3), 80-71, and picked up their first SEC road win of the year, while White notched his first win as a head coach against his alma mater. KeVaughn Allen led the Gators with 27 points and six rebounds on 9 of 11 shooting from the field, while knocking down six of his seven three-point looks.  Dorian Finney-Smith recorded his fourth double-double of the season, putting up 17 points and 10 rebounds, while knocking down nine of 11 free throws. Coach White called the performance, “Dorian Finney Smith’s best game of the season” and discussed the environment in Oxford.

Florida shot the ball astonishingly well from downtown, going 11 of 20 (55%) from beyond the arc, well above their 29% average. The Rebels looked more like the Gators than themselves from three-point range, going 5 of 20(25%). Stefan Moody put up half of the Rebel’s three-point attempts, going 3 for 10. Coach White even called the game the Gator’s best offensive performance of the season.

The Gators out rebounded the Rebels, 39-29, picking up 10 offensive boards. Florida’s bench was important in the victory as well, adding 18 points to the Gators’ total, led by Kasey Hill, who would score 11 points off the bench.

Ole Miss guard Stefan Moody, the SEC’s leading scorer, wasn’t all that efficient for the Rebels, shooting 40% from the floor and 30% from downtown, but his volume shooting led to a team high 22 points. After the game, Mike White discussed how the team limited Moody.

Forward Sebastian Saiz led the Rebels in the interior, scoring 17 points and grabbing six boards. Ole Miss scored 34 of their 71 points in the paint.

The Gators opened the game 5 of 5 from the floor, jumping out to a quick 13-2 lead over the Rebels. During that run, Florida uncharacteristically knocked down both of their attempted three-pointers and all three free throws.

Only 3:14 into the game and down by nine, Ole Miss’ leading scorer, Stefan Moody, picked up his second personal foul and had to come out of the game. The Gators took advantage, going on a 9-4 run to take a 22-6 lead.

Florida took its largest lead of the first half on a KeVaughn Allen three-pointer with 29 seconds left to put the Gators up by 19. Allen finished the half red hot, leading Florida in first half scoring with 20 points on 7 of 8 shooting, including 5 of 6 from downtown. The Gators went into the locker room up 49-30 over the Rebels after the first 20 minutes.

Florida dominated the interior, scoring 20 of their 49 first half points in the paint. John Egbunu led the inside attack finishing with eight points, all in the post, on 4 of 4 shooting. The Gators out rebounded the Rebels in the first half, 20-10, grabbing 15 of those boards on the defensive end, not allowing Ole Miss to get second chance attempts.

In the first half, the Gators found the stroke they were missing all season. Florida went 18 of 29 (62%) from the floor and an astounding 8 of 14 (57%) from beyond the arc. Ole Miss didn’t find the same success on the offensive end, only knocking down 10 of their 26 shots in the first half, and 2 of 11 from downtown. Stefan Moody got into foul trouble early, and finished the first half with just nine points on 2 of 7 shooting.  Ole Miss forward Sebastian Saiz led the Rebel’s in first half scoring, finishing with 10 points.

From the free throw line, the Gators looked like a completely different team than they had all season, knocking down 5 of 6 (83%) from the charity stripe in the first half, well above their 60.6% average on the season. Stellar ball movement allowed Florida to get good looks in the first half, finishing with 13 assists to Ole Miss’ five.

The Gators opened the second half by jumping to their largest lead of the game, going up 21 on the Rebels after a smooth John Egbunu pump fake and layup with 18:15 left to go in the game. At the halfway mark of the second half, Florida found itself maintaining their lead, up 65-46 on Ole Miss. Despite shooting 33.3% in that span, the Gators forced eight turnovers, allowing them to sustain their lead.

With 7:56 remaining in the contest, the Rebels cut the Gators’ lead to 11 following a 9-0 run. KeVaughn Allen wouldn’t let Ole Miss pick up too much momentum, scoring five straight points to help put the Gators back up 72-56 with just under five minutes remaining. While Ole Miss would outscore Florida in the second half 41-31, it was not enough and the Gators would get the win.

Saturday’s game marked only the second time in the past nine meetings between the Gators and Rebels in which the score was decided by seven points or more.

Florida will have two days of rest before taking on Mississippi State in Gainesville on Tuesday night at 7:00 p.m. The game will be Florida’s first home contest since January 9th, and the first and only meeting between the Bulldogs and Gators this season.