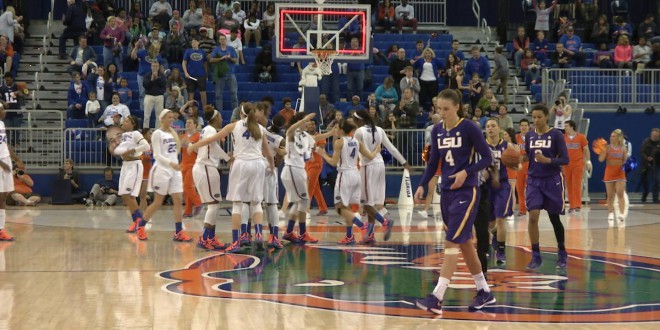 The Tigers from the Bayou came to hunt the Florida Gators, and the Tigers’ plan was working, until the Gators rolled on a wave of momentum.

LSU kept the momentum for three quarters. With the Tigers pouncing on the Gators’ sloppy execution, LSU seemed to score every time they took a visit to their basket. LSU’s scoring machine came from players like Alexiz Hyder, Jasmine Rhodes, Anne Pedersen, and Shanice Norton. All four Tigers combined to put up 38 points for LSU. The Tigers only listing eight players on today’s roster and it seemed like it would become a substitution problem for them and an advantage for Florida. However, everyone in the O’Dome quickly learned that it wouldn’t become a problem.

From a glance, it seemed like Florida’s scoring problems against Georgia, trickled down to this game against the Tigers. When the Gators finally battled the ball back from the Tigers, Florida could not find a way to capitalize. But, the Gators did do just enough to hang around and keep it interesting.

One would think that the Gators’ struggles and atrocious offensive first half, against Georgia and LSU, would be because of finally experiencing some national recognition in the AP rankings. Head coach, Amanda Butler, thinks otherwise.

However, coach Butler does recognize that her Gators need to improve on rebounding as the season goes on.

Both teams are familiar with swamp-like atmospheres, but the Gators knowing how to swim out of high waters, resulted in a fourth quarter rally to remember. Florida scored 20 points, in the final minutes, compared to LSU’s seven. The Gators’ defense found its chomp which caused its offense to find the rhythm it was searching for the entire game. 15 points from Eleanna Christinaki, the charismatic Gator from Greece,  led Florida in scoring.

Eleanna Christinaki sees this game as a bounce back game the team needed.

2009 was the last time the Gators have come out victorious as a ranked team. Florida put an end to that statistic with the win over LSU.

Florida improves to 15-and-2 overall and 3-and-2 against SEC opponents. The Gators got the SEC home-win they were searching for. The next opponent on the Gators schedule is another SEC wild animal, the Alabama Crimson Tide. The Tide rolls into Gainesville on Thursday night.

A senior at the University of Florida reporting on Gator sports, local Gainesville and surrounding area sports, and telling the stories of local athletes. Born and raised in Gainesville, Florida with a passion for telling people's stories and having fun doing it.
@SportsDarwinism
Previous Gators Pick up 1st SEC Road Win, Take Down Ole Miss, 80-71
Next South Carolina Travel to Oxford to Take on Moody, Ole Miss